‘He’s been at the top for 15 years’: Eden Hazard backs his Real Madrid teammate Karim Benzema to win the Ballon d’Or after the French striker was nominated for the NINTH time

The Los Blancos captain scored an incredible 44 goals in 46 games last season, moving past 400 club goals in the process.

He was particularly impressive in the club’s Champions League campaign, as Real extended their record by picking up a 14th European Cup. 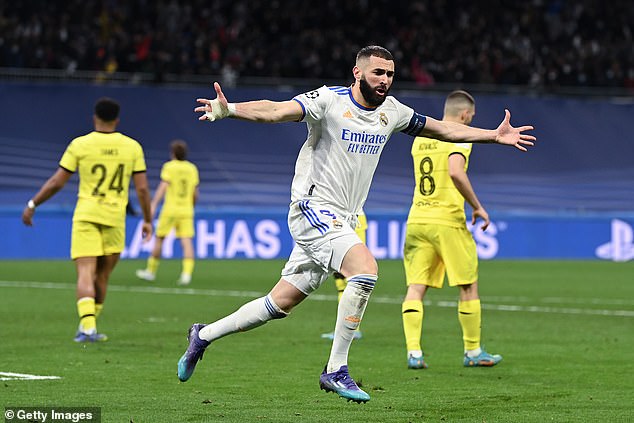 Benzema netted 15 times in 12 Champions League appearances with hat-tricks in the knockout stage against Paris Saint-Germain and Chelsea.

For Hazard, this should be more than enough to earn the 34-year-old a first Ballon d’Or win after nine nominations. He told ESPN: ‘I think he deserves it. You know, there’s no doubt about it.

‘But I think he deserves it not just for that season, but for his whole career, you know? It’s like he’s been at the top for 15 years.’

The former Chelsea man continued: ‘Maybe he’s scoring more goals, which is why people just want him to win this Ballon d’Or, but I think he deserved it before, like five years ago.

‘He’s our captain now and he’s also, like, a really good guy, you know? He’s not talking that much on the pitch, doing what he wants.

‘He’s our leader. So, we just pushed him to go for the Ballon d’Or.’

Benzema is the favourite to take home football’s most coveted individual accolade, but he does face competition from Mohamed Salah after he shared the Premier League Golden Boot and came close to a quadruple, and Sadio Mane after his triumph at the Africa Cup of Nations with Senegal.