Doha: Martin Boyle has been ruled out of the World Cup after losing an uphill battle against a knee problem that will see him sit out a second major tournament in a row for the Socceroos – but star midfielder Ajdin Hrustic has been cleared to play against France.

Scottish Premiership star Boyle went down injured playing for Hibernian three weeks ago and had failed to train with the main group since arriving in Doha, with Graham Arnold and his coaching staff eager to give him every chance to prove his fitness.

But they officially drew a line through his name on Sunday (local time), two days out from their opening Group D fixture against the defending world champions, with Melbourne City’s Marco Tilio brought into the 26-man squad as his replacement.

It is a bitter blow for Boyle, who also couldn’t play in the 2019 Asian Cup for his adopted country because of an injury he picked up in a warm-up match, and now may have missed his only chance to represent Australia on the game’s biggest stage.

“Devastating news for the Martin and the family,” Arnold said.

“We pretty much knew it was going to be touch-and-go when we selected him … we were probably 80-20 that Boyle would have been out, but we had to give him every last chance to try and get fit especially because of the sacrifices and everything that he’s done through the whole campaign. 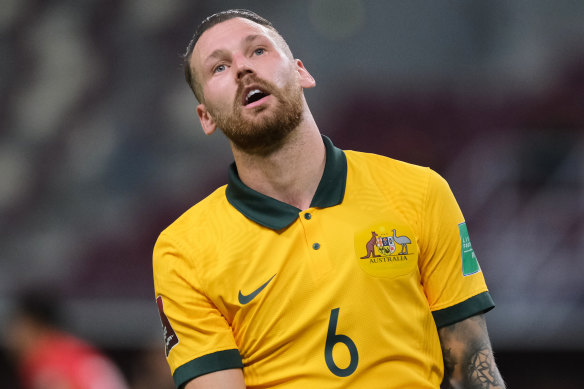 Martin Boyle has been replaced by Marco Tilio in the Socceroos’ 26-man World Cup squad.Credit:Getty

“Boyle’s been so important right through this whole campaign — he’s been probably one of our best players. But the medical staff have done everything they possibly can. And yesterday was pretty much the last chance and it didn’t come through well.

“Martin is in great spirits. He’s going to stay on here and be part of it still, he brings such great energy to the camp. Now it’s about getting the rest of the players ready.”

The prognosis is much better for Hrustic, who was also in a race against time to be fit after hurting his ankle on duty for Hellas Verona in Italy’s Serie A. The 26-year-old has spent much of his time in Qatar working alongside Boyle on an individual program and receiving treatment at the high-tech Aspetar sports medicine hospital next to their base at the Aspire Academy.

Arnold said Hrustic won’t start against France, potentially opening the door for Middlesbrough’s Riley McGree, but would come off the bench and be available for Australia’s subsequent games against Tunisia and Denmark. 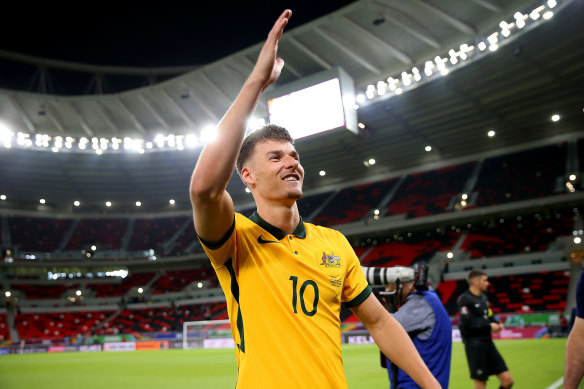 Ajdin Hrustic won’t be part of Graham Arnold’s starting side against France but is expected to feature.Credit:Getty

“Ajdin is fine. Ajdin is capable of playing against France,” he said.

“He won’t start, but he’s capable of coming off the bench and having an impact. But he’ll be ready for sure to start game two.”

All other players, Arnold said, are fit and ready to go, including key defender Harry Souttar who is back from his ACL injury and lacking match fitness, but has presented in “excellent” shape.

Rumours are growing that the Socceroos are contemplating a back three which could also feature Heart of Midlothian’s Kye Rowles and Sunderland’s Bailey Wright next to the Stoke City man.

Tilio, 21, meanwhile, narrowly missed Arnold’s initial cut but has been presented with the opportunity of a lifetime through Boyle’s misfortune.

It means the Socceroos now have 18 players in their squad who have never featured at a World Cup, many of whom like Tilio came through the ranks of the Olyroos under Arnold.

“He’s integrated really well. I called him, obviously, to tell him he wasn’t part of the 26, but at the same time, he was on standby,” Arnold said.

“Melbourne City have been fantastic, releasing him to let him come across and train.”

Watch every match of the UEFA Champions League, UEFA Europa League and UEFA Europa Conference League on Stan Sport. Returns for the Round of 16 in Febuary 2023, with all matches streaming ad-free, live and on demand.