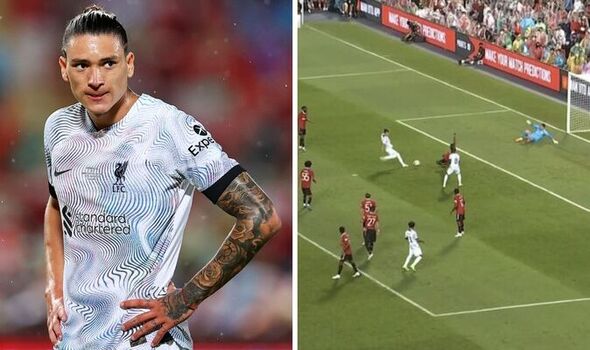 It’s clear Darwin Nunez will need plenty of service if he is to replace the goals of Sadio Mane next season, following a challenging debut cameo in Liverpool red in Thailand against Manchester United. The Uruguayan was struggling with blisters in Jurgen Klopp’s side’s final training session before the encounter and he was summoned from the bench for the final 30 minutes of the friendly.

It’s clear to see why he was of such strong interest to the Anfield hierarchy. His relentless pressing and willingness to run in behind is going to stretch Premier League defences from the get-go.

Yet in terms of his finishing, Nunez seemingly has plenty to work on despite netting 34 goals in all competitions for Benfica last season.

He squandered a glorious chance to get off the mark in style when he fired over from close range with the goal at his mercy.

Mohamed Salah controlled the ball brilliantly before jinking inside and unleashing a curling effort which came back off the post. 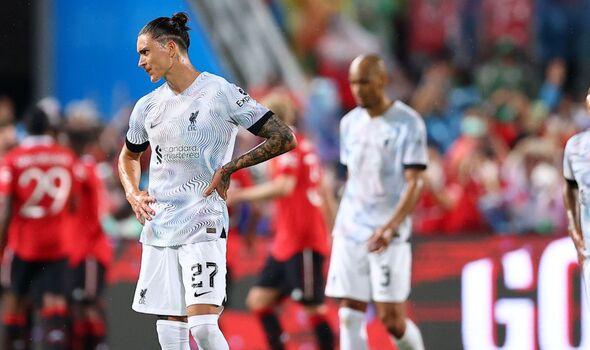 The ball then came out to Nunez after deflecting off the outstretched arm of Tom Heaton but Nunez fluffed his lines – blazing over.

The potential club-record signing was mocked by rival fans on social media for his finishing in Monday’s training session and the bobbly surface at the Rajamangala National Stadium did Nunez no favours in the 4-0 defeat to United.

Liverpool’s new signing lack a bit of composure at times but he did test Heaton with a stinging drive after controlling brilliantly inside the box.

Yet it goes without saying, Nunez will get plenty more chances this season and his movement and frame make him the perfect target for the likes of Trent Alexander-Arnold and Andy Robertson to hit.

Nunez showcased his desire to run in behind defences as he got onto the end of a few raking long balls.

He is a speedy customer, who also possesses strength and can do both sides of the game – by playing with his back to goal and facing forwards.

Patience will be required as Nunez adapts his game to Liverpool’s style and there will be more to come from him in the remaining friendly as Klopp’s side heads to Singapore to face Crystal Palace.

The intriguing proposition is how Nunez’s arrival affects the likes of Roberto Firmino and Diogo’s Jota’s chances of minutes.

While it’s a long old season, you would expect Nunez to feature prominently through the middle for the Reds.

He brings an impressive blend of both Firmino and Jota’s qualities to the table – providing manager Klopp with plenty of food for thought.

Nunez can hold the ball up like the Brazilian, yet much like Jota – he’s willing to dart in behind defences to collect the ball.