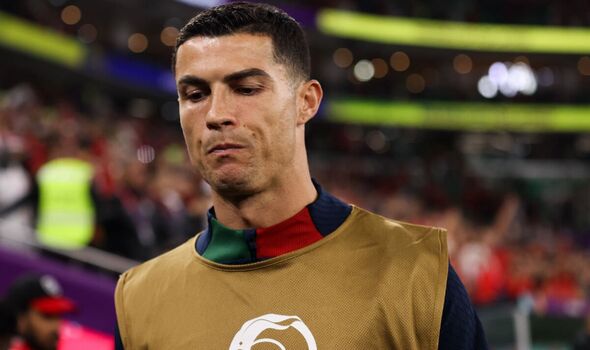 Cristiano Ronaldo was offered to Bundesliga club Eintracht Frankfurt as the axed former Manchester United star searches for his next move, the German side’s CEO has revealed. Ronaldo remains without a new team having had his Red Devils contract terminated in November.

Frankfurt CEO Axel Hellmann has discussed being offered Ronaldo several months ago. The 37-year-old striker has been strongly linked with a mega-money switch to Saudi Arabian team Al-Nassr but is believed to want to stay in Europe.

Ronaldo is reported to believe he can still play at the highest level of European football and is desperate to stay ahead of rival Lionel Messi in terms of Champions League goals scored. Messi is just 16 strikes off Ronaldo’s total of 141 goals.

Hellmann has added fuel to speculation that Ronaldo wants to remain in Europe. The 51-year-old has revealed that the Real Madrid icon was offered to Frankfurt several months ago, which could suggest the same proposal was made to every Champions League team.

“He was even offered to us,” Hellmann has told German broadcaster Sport1. Philip Hozier, the chairman of the club’s supervisory board added: “I have the feeling he was offered to every team in the Champions League.”

Frankfurt qualified for the Champions League after beating Rangers in last season’s Europa League final. As a recent trophy winner, they could be an attractive proposition to Ronaldo, who is keen to add to his array of titles.

Speculation before and during the World Cup suggested that the veteran attacker had been made a dizzying £175million offer from Al-Nassr ahead of the January transfer window. However, the Portugal captain slammed those rumours as “lies”, while Al-Nassr’s president quashed the reports.

In a video captured by journalist Ali El-Enezi last Thursday, Musalli Al Muammar said: “Who is Ronaldo? I don’t know him.”

The Al-Nassr president went on to talk more seriously to SSC Sports, but remained vague on Ronaldo’s future. He said: “Cristiano was busy recently with the World Cup and I didn’t expect him to negotiate with anyone. We will not speak about other players, I wish the best to Cristiano with any decision.”