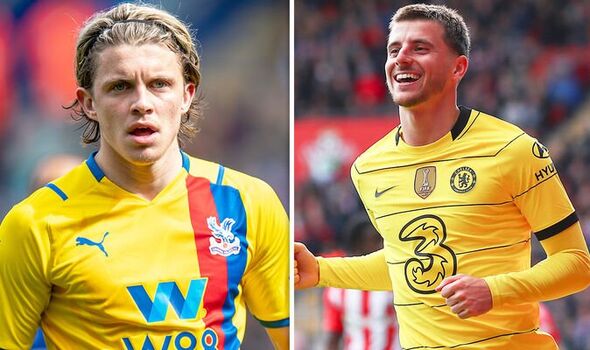 Conor Gallagher “could be like a massive signing” for Chelsea when he returns from his loan at Crystal Palace, claims former Blues coach Jody Morris. Frank Lampard’s former No 2 says the midfielder can have a similar impact at Stamford Bridge to Mason Mount.

Gallagher has excelled during his spell at Palace this season. The 22-year-old has eight goals and three assists to his name in 27 Premier League appearances.

He is yet to make his first-team debut for Chelsea, having also spent time on loan at West Brom, Swansea and Charlton. But Morris believes Gallagher has shown enough to return to the club as a starter next season.

Morris, speaking exclusively to Ladbrokes at the launch of their 5-A-Side bet on Chelsea v Crystal Palace, said: “There’s no reason why Chelsea shouldn’t be looking at bringing him into the starting line-up next season. I hope they bring him in with the intention of playing him, though; don’t just bring him back and keep hold of him to play him for 10 or 15 games; you’ve got to look to the future.”

Morris says there will be no shortage of takers if Chelsea do not view Gallagher as part of their future plans. But, having coached Mount during his loan at Derby, he can see a similar pattern for Gallagher.

Morris added: “A lot of Chelsea fans won’t like me saying this, but if you’re Conor Gallagher and you’re looking at your future, you’re thinking ‘no one is guaranteed to play week-in, week-out at Chelsea’. Conor would want to know that the manager believes in him and is willing to give him an opportunity to showcase his talent in the first team.

“And, let me tell you, there would be a lot of takers, and I’m talking about serious takers throughout Europe, who’ll be keeping an eye on his situation. He’s certainly put himself in the shop window.

“He could be like a massive summer signing for Chelsea when he returns to the club at the end of the season; you only have to look at what happened to Mason Mount and his career when he came back from Derby. Tammy Abraham produced as well; there’s really no reason why clubs shouldn’t be giving these players a real opportunity, regardless of whether you’re a top four club or not.”