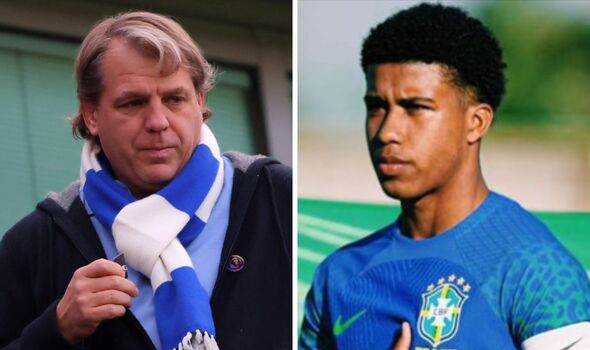 Chelsea’s reported deal to sign Vasco da Gama starlet Andrey Santos could reportedly end up costing as much as £35million due to various bonuses. The Blues have been extremely active off the field in the past few weeks in preparation for the January transfer window.

An agreement is already in place for Christopher Nkunku to join next year in a deal worth up to £60million. But Chelsea are also preparing for the future and stocking up their academy with young stars.

Carney Chukwuemeka and Gabriel Slonina were snapped up this past summer with the pair seen as stars of the future. David Datro Fofana has reportedly completed his medical after Chelsea agreed to a £8.6m fee for the striker.

And they’ve now added to that young crop with the signing of Santos from Vasco da Gama. The highly-rated 18-year-old was chased by the likes of Newcastle and Manchester City, but Chelsea appear to have won the race for his signature.

It was initially reported that Chelsea would be paying an upfront fee of around £13m for the Brazilian, rising to £18m with potential add-ons. But Le10 Sport now claim that fee could end up rising to a whopping £35m with all the bonuses taking into consideration.

The report states that Chelsea and Vasco da Gama were locked in intense negotiations as the deal neared an agreement. And the Brazilian outfit appear to have been able to insert a number of add-ons into the agreement that could cost Chelsea in the long run.

Both Santos and Fofana are expected to be loaned back out when they officially join Chelsea next month, along with Slonina who has been training with the Blues after his MLS season with Chicago Fire finished. Chelsea are also being tipped to bolster the first-team next month, but Graham Potter has indicated that there won’t be huge changes.

“What I would say is that historically the January window isn’t so straightforward to find solutions,” he said. “From my perspective, there was an extreme period and I would not want to make too many drastic assessments based on that extreme period.

“I think the team, as I see it, has not functioned as maximally as I would like it to and I think it can do. The job of a head coach is to focus on the ones that are here and make them better. There is room for improvement there, for sure.”