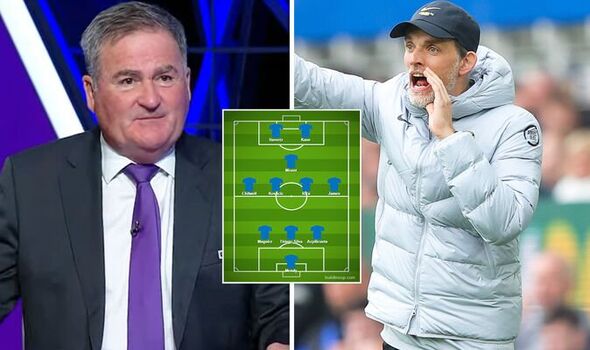 Chelsea will have all bases covered if they listen to Richard Key’s transfer advice this summer. Keys has backed Chelsea to build an English spine by signing three of Gareth Southgate’s most important players. Express Sport looks at how the Blues could line up with Harry Maguire, Declan Rice and Harry Kane in their starting XI.

Edouard Mendy may not have had his best season following the high standards he set in his debut campaign at the club. However, it appears very unlikely that Thomas Tuchel will look to replace the Senegal star this summer.

Kepa Arrizabalaga could look for an exit to get more regular game time ahead of the World Cup later this year, so Chelsea could sign a goalkeeper. But Mendy’s position is safe for the time being.

The most surprising inclusion in Key’s recommendations is Manchester United captain Maguire. The centre-back has had a tough season at Old Trafford and faces an uncertain future under new boss Erik ten Hag.

But Keys believes a fresh challenge could be good for Maguire. He could line up on the left of a back three, with Thiago Silva the central centre-back.

Cesar Azpilicueta’s future at Chelsea is in doubt but if he does stay, the skipper will likely be a regular in his familiar role on the right.

Keys believes West Ham star Rice is worth every penny of the £150m figure that has been bandied about. The midfielder spent time in the Chelsea academy before being released in 2014.

He and his family remain Chelsea fans so a return to the club would certainly be attractive. Keys sees Rice as the perfect replacement for N’Golo Kante, with Mateo Kovacic his midfield partner in this team.

Reece James has been one of Chelsea’s players of the season, excelling at right wing-back. The return of Ben Chilwell at some point next season will also be huge, as his knee injury proved to be a pivotal moment this term.

Chelsea showed interest in Harry Kane last summer and Keys can see a move across London happening. With Manchester City set to sign Erling Haaland, there aren’t many clubs that the England captain could join.

Tottenham would be reluctant to let Kane join a direct rival in Chelsea. But his contract expires in 2024 and they will be wary of how much they could miss out on if he ends up leaving for nothing in two years’ time.

Mason Mount is one of the first names on the Chelsea team sheet at No 10. Kai Havertz could partner Kane up front, unless Tuchel prefers the quicker Timo Werner to play off the 28-year-old.