Tuchel quiet on Kounde but hopeful Azpilicueta stays at Chelsea

Chelsea are reportedly trying to hijack Paris Saint-Germain’s move for Nordi Mukiele, despite the French side already agreeing a £13million fee with RB Leipzig. The Blues have seemingly been forced into swift action with their Jules Kounde pursuit hanging in the balance, and offering Timo Werner back to the German side could make the difference.

Much of Chelsea’s summer has been spent chasing centre-back recruits after losing Antonio Rudiger and Andreas Christensen at the end of June. Kalidou Koulibaly’s arrival from Napoli was an impressive statement, and they wasted no time in moving onto Sevilla defender Kounde.

Despite agreeing a £55million fee for the Frenchman, Barcelona told him to sit tight and, after activating a financial ‘lever’ last week, they are reportedly on the verge of hijacking the deal. Kounde sparked concerns that his move to Stamford Bridge could be off when he rejoined Sevilla’s pre-season tour on Thursday.

Hedging their bets, Chelsea are now plotting an audacious move to hijack Mukiele’s switch to PSG. Footmercato claim that the Blues want to include Werner in a swap deal, which would see the German return to his former club. 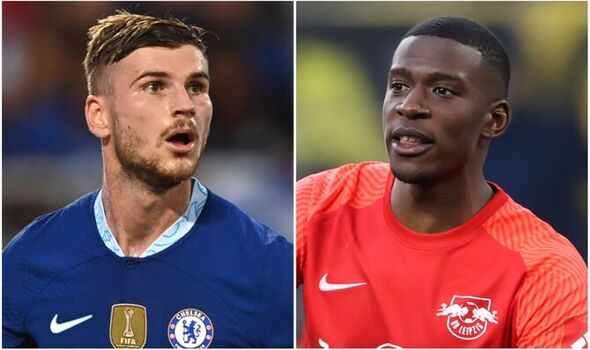 Whichever way the move turns out, it is likely to be concluded quickly with PSG hopeful that the 24-year-old can join up with their squad by Wednesday. A £13m fee had already been agreed with RB Leipzig, and Mukiele was poised to undergo a medical before signing his contract in Paris.

It remains to be seen whether Chelsea’s involvement will provoke a u-turn, or whether the Frenchman would be keen to play in his homeland for the first time since leaving Montpellier in 2018. Mukiele can play at right-back or as a right-sided cente-back, making him a perfect fit for Thomas Tuchel’s three-back system and an ideal alternative to Kounde.