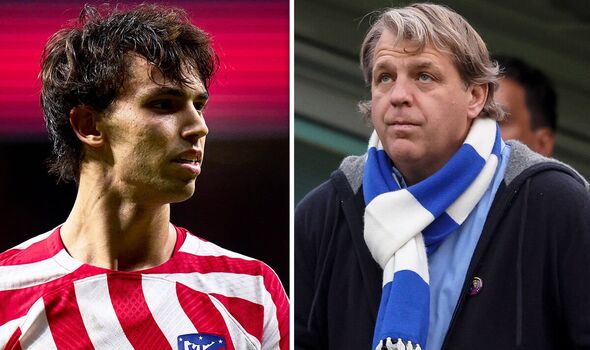 Chelsea chiefs changed their mind over a deal for Joao Felix during internal meetings this week, according to reports. The Blues are claimed to have initially seen no value in a move for the Atletico Madrid star and are still disappointed there will be no option to buy the player.

Felix is set to join Chelsea on loan for the remainder of the season. The Premier League side will cover the 23-year-old’s entire salary and also pay a loan fee of just under £10million.

Felix has not seen eye to eye with Atletico boss Diego Simeone and despite starting the 1-0 loss to Barcelona on Sunday, he will be playing his football elsewhere until the summer at least. Arsenal and Manchester United have also shown an interest in the player but Chelsea have won the race.

However, meetings in the last 48 hours, including with head coach Graham Potter, has seen the club change their mind. They decided they would meet Atletico’s demands, something Arsenal and United were not willing to do.

Jacobs says the loan fee reduced slightly and that was enough to convince the Chelsea hierarchy. He claims Chelsea were keen on getting an option-to-buy clause inserted in a deal for Felix.

However, Blues chiefs were unable to strike an agreement on that regard. Felix will therefore go back to Atletico at the end of the loan and Chelsea would have to negotiate a completely separate deal if they wished to sign him on a longer-term basis.

Felix has started just seven La Liga matches so far this season. He has four goals and three assists in his 14 appearances, as well as five yellow cards.

He is set to fly to London this week to undergo his medical and will become the fourth signing of the window for Chelsea. Striker David Datro Fofana was the first player brought in, joining from Norwegian club Molde.

France defender Benoit Badiashile is the most expensive acquisition of the window so far, joining for around £35m. Brazilian youngster Andrey Santos was the latest arrival, confirmed earlier this week to have joined from Vasco da Gama.