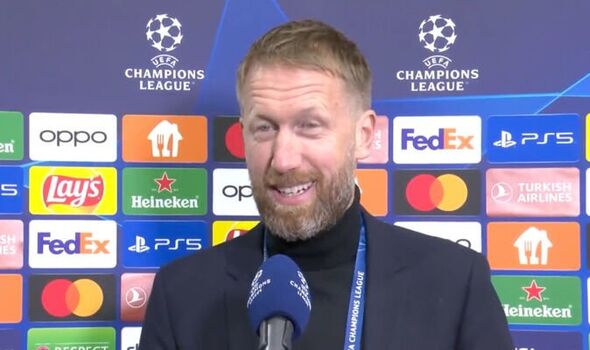 Chelsea head coach Graham Potter hailed Kai Havertz after the forward scored the winning goal in their 2-1 win over Red Bull Salzburg on Wednesday. The Blues secured their passage into the last-16 of the knockout round after the German’s stunning effort sealed the points in Austria and Potter declared his happiness with his contribution after a poor run of form recently.

The German had not scored since the 3-0 win over Wolves on October 8 and had badly struggled to adapt to a new role on the right side of Potter’s 3-4-3 shape in recent weeks, dropping to the bench against Brentford and Manchester United.

But the 23-year-old produced a wonderful effort to strike into the top corner from 20 yards off the underside of the bar, leaving Salzburg goalkeeper Philipp Kohn no chance as Chelsea ended the hosts’ 40-game unbeaten run at home.

It was only the third goal Havertz has scored this season and he had been running the risk of losing his place in the team after Pierre-Emerick Aubameyang’s recent form, while Raheem Sterling and Mason Mount are regular starters to fill the other slots in the front three.

But Potter, who was spotted looking on in amazement on the touchline after Havertz’s effort hit the back of the net, praised the forward for working through a tough period after scoring only two goals before his strike against Salzburg.

“It was amazing, top corner and it makes my job a lot easier when they can do that, to be fair!” Potter told BT Sport after the game. “Great for him, really pleased because he’s been fighting and trying his best and was nearly there to scoring more. To score that and help us through today, it’s fantastic.”

Potter’s men survived a late fightback from Salzburg after Kepa Arrizabalaga’s goal was peppered with shots late on and the former Brighton boss was pleased to see his side showed their mental strength in securing the win.

“Delighted, fantastic performance from the players, it thought they showed real courage here because the atmosphere, the way they’re so intense, they put us under a lot of pressure but I thought we controlled it quite well and attacked well.

“We created some chances, pretty disappointed to be only 1-0 at half time and one mistake, one action from them which can happen at this level but then we responded really well, great goal from Kai and I think we deserved to go through.

Potter is still unbeaten since taking charge of the club after succeeding Thomas Tuchel in September, winning six of his nine games with the Blues including back-to-back victories over AC Milan to put them top of the group.

But the 47-year-old insists the players – not him – deserve the praise being heaped upon him for transforming their Champions League and domestic campaigns.

Asked if he was making it look easy, Potter replied: “I wish! No, credit to the players, they have been fantastic and it was a tough game against Salzburg [at home] in difficult circumstances with not too much understanding of the players at all.

“The Milan games were really important for us to show our quality and tonight we did, to win is a fantastic result for us.”