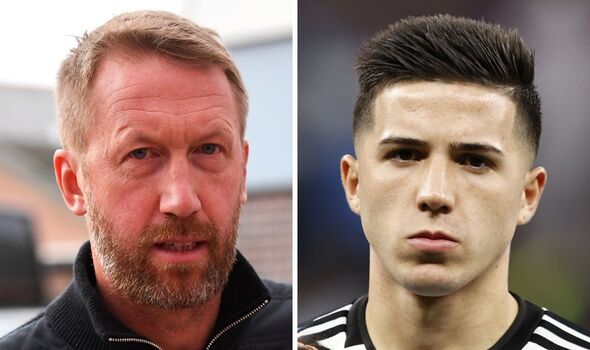 Chelsea boss Graham Potter has declared he does not get involved in disagreements via the media after Benfica boss Roger Schmidt let rip over the Blues’ attempts to sign Enzo Fernandez. The German tactician has taken offence to Chelsea’s approach to negotiations after the Blues tried to land the World Cup winner for less than his £105million release clause.

Schmidt made his feelings clear during a fiery press conference on Thursday, stating: “There is a club that wants him, they tried to attract him, but they know that they can only have him if they pay the clause.

“It’s disrespectful to all of us, to Benfica, they’re driving the player crazy, they pretend they want to pay the clause and then they want to negotiate.”

Speaking after the 1-0 Premier League defeat to Manchester City, Potter made it clear he had no interest in public spats – distancing himself from the saga.

He said: “I don’t get involved in conversations via the media. I have nothing to say. No comment.”

Chelsea looked set to make Fernandez one of the most expensive players in Premier League history.

However, it has now emerged that their opening offer did not surpass the player’s release clause, as previously indicated.

Instead, the Blues were trying to negotiate a cheaper deal having already agreed terms with Fernandez over a long-term contract.

Now Chelsea could be forced back to the drawing board with Jorginho and N’Golo Kante still yet to agree new contracts.

The Blues have also been linked with Potter’s former player Alexis Mac Allister, who played alongside Fernandez in midfield for Argentina in Qatar.

Brighton do not want to sell their World Cup winner, however and will reject any bids that arrive on the table this month.

Jude Bellingham, Declan Rice and Moises Caicedo are three other names that have been closely linked with Chelsea in recent months.

Todd Boehly has already been incredibly busy this month as his Chelsea shopping spree continues.

New signing Benoit Badiashile, who has signed a whopping long-term contract until 2030, sat alongside Boehly at Stamford Bridge on Thursday evening watching the defeat to City.

Christopher Nkunku is also set to arrive from RB Leipzig next summer while youngsters Andrey Santos and David Datro Fofana have also joined the Blues this month.

Shakhtar chief Darijo Srna was pictured in the director’s box at Chelsea on Thursday night after holding talks with the Blues over a deal for the 22-year-old winger.