International soccer powerhouses Brazil and Argentina will return to the MCG in June for a match ahead of the 2022 FIFA World Cup in Qatar, potentially bringing global stars Lionel Messi and Neymar to Melbourne.

The Age and the Sydney Morning Herald reported in April that negotiations to hold the match had begun, with the availability of star players potentially being a stumbling block.

But Victorian Sports Minister Martin Pakula announced on Wednesday that the Superclasico match will be held on Saturday, June 11 at the MCG. 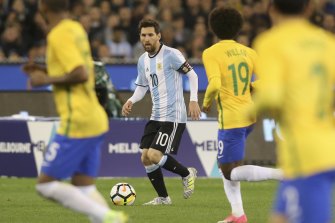 Lionel Messi playing at the MCG in 2017.Credit:Paul Rovere

Both teams played each other five years ago at the ground in front of more than 95,000 fans, with Messi participating while Brazilian star Neymar missed the match, drawing the ire of organisers.

Pakula told 3AW the state government had sought assurances strong squad would come to Australia, although injuries and other “preparation considerations” could impact the final sides.

“Certainly our expectation based on the discussions we’ve had, is the players like Messi and Neymar will be here,” Pakula said.

“We can’t be 100 per cent certain about that. But we’ve been told this is an important preparation match for them in the lead up to the World Cup and we’d expect both teams to send very strong squads.”

Tickets for the event will go on sale on April 21 at 2pm via Ticketek. The match is technically a qualifier for the World Cup but both Argentina and Brazil have already secured qualification.

The return of Brazil and Argentina to Melbourne follows multiple announcements of international soccer giants holding friendlies in Australia over winter, with Manchester United to play at the MCG against Melbourne Victory on Friday, July 15.

Barcelona will also make a historic visit to Sydney for a friendly against an A-League All Stars side on Wednesday, May 25.

Pakula said the Brazil and Argentina match would add to Victoria’s major events calendar, which also included recent announcements that golf’s Presidents Cup would also be held in Melbourne in 2028 and 2040.

“To have two of the most successful football teams in the world return to the MCG to continue their longstanding rivalry reinforces our position as one of the world’s great sporting cities and Australia’s event capital,” he said.

“Football is known as the world game and a match of this calibre will put millions of eyes on Melbourne and attract thousands of visitors to Victoria.”