Bournemouth strengthened their grip on the Championship summit with a dominant victory at home to 10-man Cardiff.

In contrast, Cardiff – playing their first game in 19 days following Covid-enforced postponements – are 20th and remain three points above the drop zone. 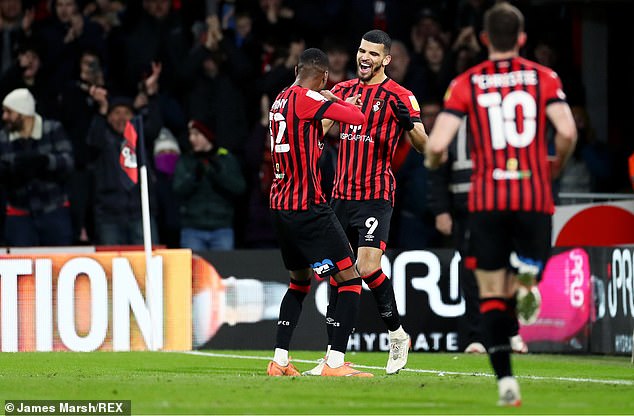 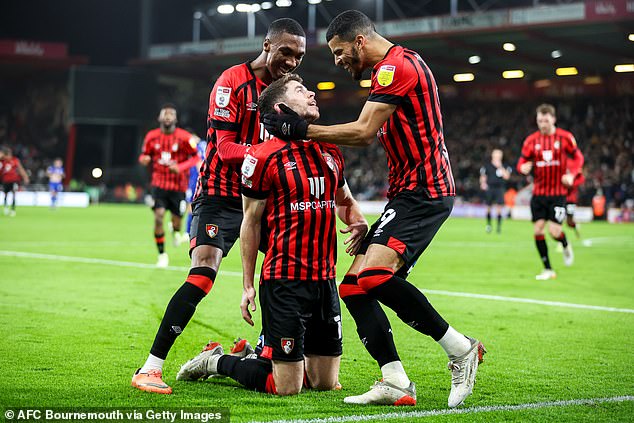 Ryan Christie (centre) had opened the scoring for Bournemouth, the Championship leaders

Their problems were compounded by Leandro Bacuna’s first-half red card and an injury to star striker Kieffer Moore.

The hosts began brightly and should have scored when Dominic Solanke slipped Lewis Cook through, but the midfielder’s touch deserted him eight yards out.

The Cherries’ dominance eventually told, with Christie gliding in from the left and firing in a shot that cannoned off Aden Flint and into the net.

Cardiff could have levelled but Mark Travers produced a stunning save after Kieffer Moore turned Ryan Giles’ pinpoint cross goalwards.

With seconds left of the first half, Phillip Billing was hacked down by Bacuna as he led a breakaway and the midfielder was rightly dismissed to leave the strugglers facing an uphill battle. 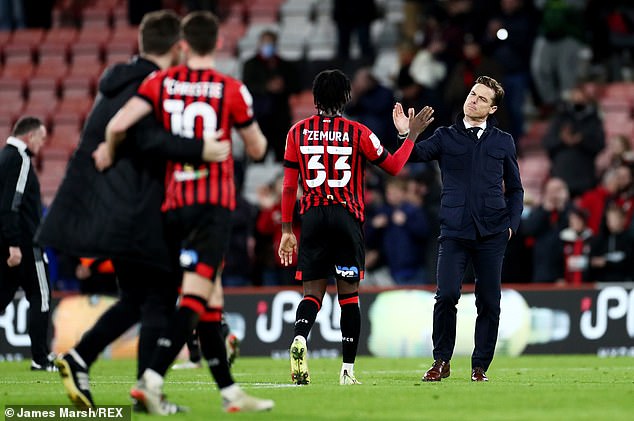 Victory was sealed when Solanke and Billing exchanged a delightful one-two on the edge of the box and the striker slotted into the far corner.

Christie then raced clear on the right but his pass towards goal was somehow deflected over the bar by Solanke from two yards out.

When Cardiff failed to clear a corner late on, Lerma lashed a shot against the bar, off keeper Alex Smithies’ back and over the line to add gloss to an emphatic win.

With that, the Cherries secured three points to reignite dreams of automatic promotion.

As the curtain closes on another box-office year of Championship action, here was a timely reminder of why this is often dubbed the most entertaining division in the world.

There is action, jeopardy and intriguing subplots in every match, reputation means nothing, and anyone can beat anyone. Win a few games to fly up the table, lose a few to be brought crashing back to earth.

Huddersfield left Nottingham with maximum points but it could have easily been none. Either team could have won this match 3-0 and it wouldn’t have been a freak scoreline.

Just look around these two teams’ names in the table. Just seven points separate Chris Wilder’s Middlesbrough in fifth and his former team, Sheffield United, in 12th – who have played three fewer games.

Seven points is nothing in the Championship – fans of Bournemouth and Fulham will testify that after their seemingly seismic gaps at the top were chopped back to nothing over Christmas.

So while this was a big three points for Huddersfield, the first time they’ve won back-to-back away games since 2017, the drop in form won’t overly irk Forest boss Steve Cooper. 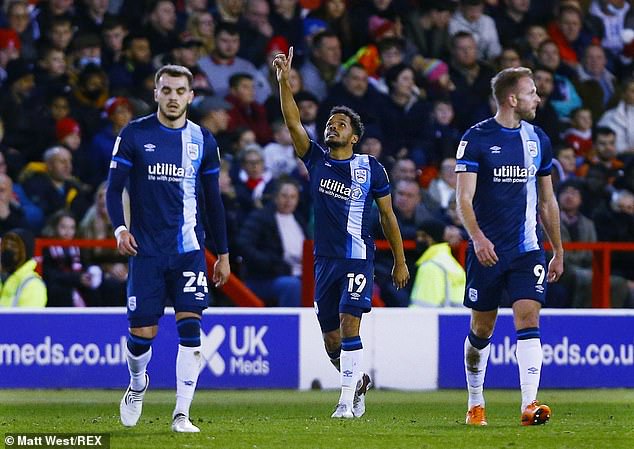 It’s the first time they have lost two in a row under him, but Cooper’s men played good football here and, with a bit of luck in front of goal, could have easily won.

Forest were the superior team, but Huddersfield had the better openings and ultimately strengthened their grip on a play-off place that Forest could have stolen from them – for now anyway – with the win.

To make it more interesting, the only goal scorer was Duane Holmes, once of Forest’s rivals Derby. He wheeled away, finger on his lips, after a powerful, near-post finish foiled Brice Samba.

Either side of that, there could have been more goals. Huddersfield’s Sorba Thomas rattled the crossbar from distance after just 17 seconds, while Philip Zinckernagel was denied by the woodwork at the other end with a venomous strike.

Both keepers were in fine form to keep the scores down. Lee Nicholls, in the Terriers’ goal, made the save of the match to deny Braian Odeja from close range in the first half.

Forest would have been back in the game if Brennan Johnson had his shooting boots on. On 53 minutes, he cut inside and pulled a shot wide. Then on the hour mark, Nicholls parried Xande Silva’s shot into his feet for a certain goal, but Johnson’s point-blank rebound went wide.

So in a play-off battle where half the league will fancy their chances, it is advantage Huddersfield. But this is a long and arduous course, and Forest won’t go away just yet.