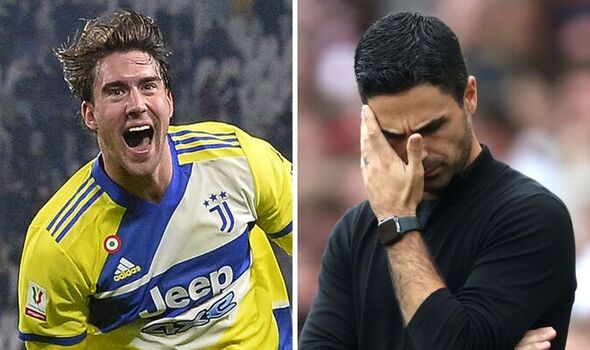 Arsenal had reportedly shown great interest in signing Dusan Vlahovic ahead of Juventus in the January transfer window – but the striker admits he knew nothing about it. The Gunners head into the summer transfer window needing to bring in a central striker.

Aubameyang’s departure six months ago left Mikel Arteta short of options in attack and now Alexandre Lacazette has left. The Gunners are still in conversation with Eddie Nketiah to extend his contract, but he’s currently set to be a free agent this summer.

The likes of Dominic Calvert-Lewin, Jonathan David and Victor Osimhen are now being linked with big-money moves to the Emirates. But Vlahovic was seemingly Arsenal’s preferred option back in January when it became clear that Aubameyang was going to be moved on.

The Serbia international became one of the most sought after forwards in world football in January due to his form with Fiorentina. Arsenal were said to be leading the race for his signature heading into the final few days of the transfer window.

But Juventus quickly stepped in to agree a £66m deal with Fiorentina with Arsenal missing out on their top target. Vlahovic has now spoken out on Arsenal’s interest in signing him, admitting he didn’t know anything about an offer from the Gunners.

“Maybe my agent knows [about Arsenal’s offer] but I never talked to anyone about it,” Vlahovic told the Telegraph. “I just had one club in my mind because Juventus is Juventus. There is nothing else to say. And now I feel honoured to be given this jersey. It’s incredible every time I put it on.

“I definitely identify with their DNA. The Juventus personality coincides with my personality. When you come here you never give up, you fight all the time, you make the sacrifices. This was definitely what I was looking for.”

Vlahovic ended up scoring on his league debut for Juventus and ended the season with seven goals in 15 Serie A appearances for the Italian giants. Arsenal have also lost out to Liverpool in their hopes of signing Darwin Nunez, although the Reds were always seen as the favourites.

“We had talks with Arsenal about Gabriel Jesus,” the agent said. “We like the project – it’s a possibility we’re discussing. There are six more clubs interested in Gabriel.”