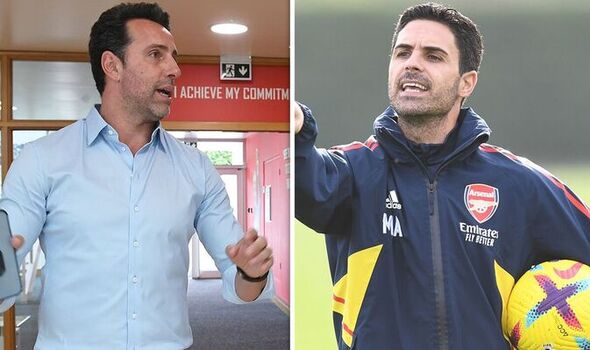 Arsenal technical director Edu has given Mikel Arteta the go ahead to make one January signing, according to reports. A winger or a midfielder is likely to be what Arteta targets in the winter transfer window.

Arsenal are currently top of the Premier League table and will remain there at Christmas if they win their next two matches away at Chelsea and Wolves. Performances so far this season has led to fans dreaming of a first league title win since 2004.

But a lack of squad depth is the main reason many believe the Gunners will ultimately fall away later in the campaign. Arteta attempted to sign a winger and a midfielder late in the summer window.

Wolves star Pedro Neto and Aston Villa’s Douglas Luiz were top targets. Luiz has since signed a new contract at Villa, while Neto is out of form and expensive.

But the Telegraph claims Edu will look to bring in one new signing for Arteta. Arsenal want to give their squad a lift for the second half of the season and build on their surprising start.

Arteta was boosted on Wednesday by Oleksandr Zinchenko’s return to training following a calf injury. Mohamed Elneny is also getting closer to full fitness after a serious hamstring problem.

Emile Smith Rowe is the only senior outfielder currently unavailable to Arteta, so the squad looks stronger than it did a couple of weeks ago. But it appears the Spaniard is still keen to add to what he has got.

The report says Arteta would welcome a new winger to provide competition up front. Saka, Gabriel Martinelli and Gabriel Jesus have all started every league match so far this season.

Reiss Nelson will be hoping to prove to Arteta before January that he can be a reliable option out wide. Nelson scored twice in Sunday’s 5-0 win over Nottingham Forest.

But Arteta is keen to give himself and the club the best shot of pulling off a remarkable title win this term.