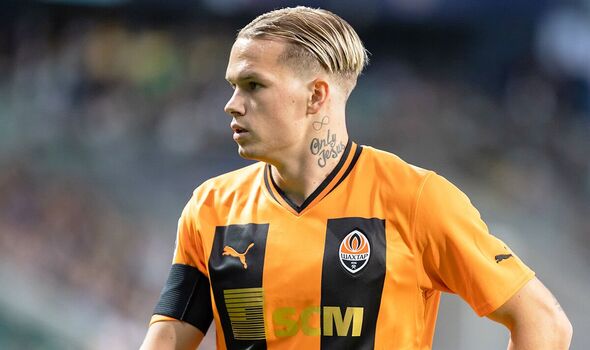 Arsenal are prioritising the signing of Shakhtar Donetsk winger Mykhaylo Mudryk in January. The Gunners have already seen an offer for the player rejected by the Ukrainian giants.

Mudryk has been linked with a move to the Emirates since late in the summer transfer window. His stock has only risen since after a successful Champions League campaign for the 21-year-old.

Arsenal made their first official move for the player earlier this week, seeing an offer worth up to £55million in total rejected by Shakhtar. The Premier League leaders are set to return with a new offer in an attempt to secure a swift deal early next month.

But what shirt number could Mudryk wear if he does complete a move to the Emirates? Express Sport takes you through the possible options.

Mikel Arteta on the transfer window and strengthening the squad

Usually reserved for a goalkeeper, 13 is the lowest number aside from No 2 that is available. Alexander Hleb was the last outfielder to wear 13 at Arsenal between 2005 and 2006.

Ainsley Maitland Niles’ loan move to Southampton this season has opened up the No 15 shirt. Maitland-Niles’ long-term future at Arsenal is in major doubt and the jersey could be an option for Mudryk.

The last expensive winger Arsenal signed wore the No 19. However, supporters may want Mudryk to wear a different number to that of club-record signing Nicolas Pepe, who flattered to deceive before leaving on loan in August.

No 20 may be the ideal shirt number for Mudryk. He wore 20 during his breakthrough season at Shakhtar last term and also for the Ukraine under-21 side.

Nuno Tavares vacated the number when he joined Marseille on loan in the summer. Previous occupants include Shkodran Mustafi, Mathieu Flamini and Johan Djourou.

The next jersey on the list was made available following another loan exit, this time Pablo Mari’s move to Monza. The Spaniard is unlikely to return and could join Monza on a permanent basis if certain clauses are triggered.

The Nos 26, 28 and 29 are all currently free at Arsenal, as are 32 and 33. The club usually reserves numbers in the late 30s for academy graduates making their way into the senior setup.

Mudryk currently wears the No 10 shirt for both club and country. However, Emile Smith Rowe won’t be giving that up anytime soon.