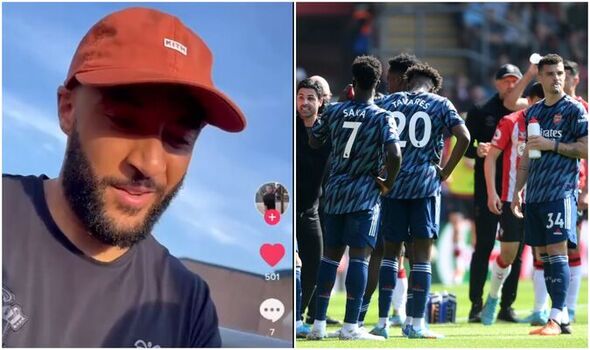 Arsenal have been mocked by Southampton winger Nathan Redmond who, in a video posted to social media, seemed unfazed about beating the Gunners because “they’re not very good”. Redmond was part of the Saints side who inflicted Arsenal’s third successive defeat on Saturday with Jan Bednarek’s goal sealing a 1-0 win.

Mikel Arteta’s side were the favourites for fourth place just a few weeks ago but had been beaten by Crystal Palace and Brighton in successive Premier League games before they visited Southampton. Tottenham’s defeat by Brighton on Saturday afternoon gave Arsenal the chance to reinvigorate their Champions League hopes.

But the North Londoners succumbed to Bednarek’s goal just before half-time. Arsenal had a staggering 23 shots and 76 percent of the ball on the South Coast but could not find a way past Fraser Forster.

Once upon a time, a win over Arsenal would have been seen as a huge scalp for a bottom-half Premier League team. But successive eighth-place finishes have made the Gunners less feared.

And Southampton winger Redmond has quipped that he was unfazed at beating the three-times Premier League champions. In a video posted to TikTok, the one-time England international is asked by a fan how he felt after a win over Arsenal.

“It’s alright,” Redmond says in the clip with a grimaced expression, before joking: “They’re not very good.”

It is unclear if the 28-year-old knew he was being recorded. Redmond was loosely linked with a transfer to Arsenal when Unai Emery was manager in the summer of 2019, but the Spaniard was soon sacked.

Emery’s successor, Arteta, oversaw an incredible turnaround this season before their recent slump. Arsenal lost their opening four matches and were bottom of the top-flight but then soared up the table and were recently favourites to win the final Champions League qualification spot.

Arteta’s side are now three points off fourth-placed Spurs but have a game in hand over their North London rivals. However, a failure to score for the third time in five matches will worry fans.

Arteta was asked if the difference between Arsenal and the Premier League’s elite teams – Manchester City, Liverpool and Chelsea – is a clinical edge. The 40-year-old does not believe his players can be compared to those sides until they become ‘world-class’.

“It’s what we have. The players that we have haven’t done it in this league. When you have world class players who have done it in the league for ten years, I would probably say that,” Arteta bemoaned.

“I am the first one to defend them, to support them, you see how they try. The only way to do it is to insist that what happened today might happen the next day or the next month.”