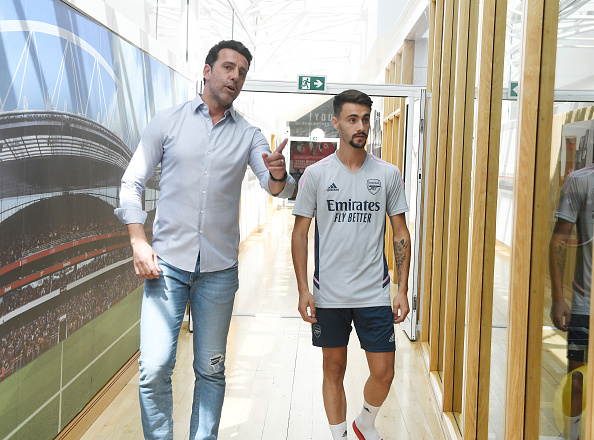 The 44-year-old was promoted two years ago following the departure of Raul Sanllehi and has helped mastermind a near total overhaul of the club’s first team squad.

Working in tandem with Mikel Arteta, the Brazilian has helped drastically reduce both a spiraling wage bill and the average age of the team to the extent that is now one of the youngest in the Premier League.

Asked about Edu’s future ahead of last week’s Europa League game against PSV Eindhoven, Arteta said: ‘It is a question for him but from what I know he is fully committed.’

Edu, meanwhile, played a key role in brokering the deals that brought Fabio Vieira, Gabriel Jesus and Oleksandr Zinchenko to north London in the summer with Arsenal now boasting a squad capable of sustaining a challenge for a top four place.

The club’s former midfielder’s work has attracted attention from at least two European clubs, according to the Daily Mail, with the interest described as ‘very interesting’ according to sources.

Negotiations with the 44-year-old are said to be underway, however, with Arsenal keen to secure the future of the club’s former midfielder with a view to him completing his rebuilding project.

With that in mind, Arsenal will arm Arteta with a £50million transfer budget in the January transfer window to further bolster a squad that has been stretched to breaking point during the course of a grueling October schedule.

Arsenal still lead the Premier League by two points despite Sunday’s draw at Southampton but Arteta is concerned at the burden being place on Bukayo Saka in particular.

The Gunners will look to sign a new winger when the window reopens having failed with summer moves for Pedro Neto, Raphinha and Mykhaylo Petrovych Mudryk,

A new central midfielder is also viewed as a priority given doubts over Thomas Partey’s durability and the club could look to renew their interest in Brazil international Danilo from Palmeiras.

Arsenal made a deadline day move for another Brazilian, Douglas Luiz, but the Aston Villa star signed a new long-term contract last week.