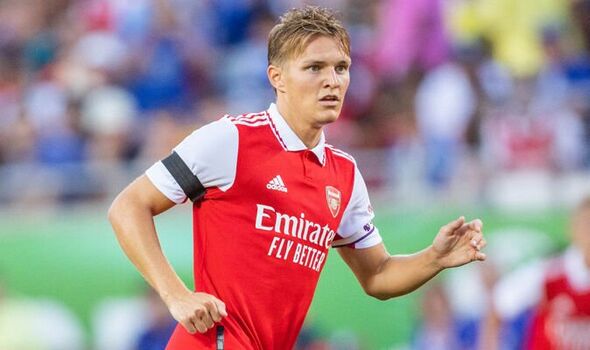 Arsenal have named Martin Odegaard as their new club captain as Mikel Arteta plots the Gunners’ leadership group for the 2022-23 Premier League season. Odegaard took on the responsibility for much of last season after Pierre-Emerick Aubameyang’s acrimonious departure.

The North Londoners have not had a permanent captain since Aubameyang was stripped of the captaincy last December following a string of disciplinary issues. The Gabon international had his contract terminated in January before joining Barcelona.

Odegaard shared the role with striker Alexandre Lacazette until the end of the season. However, Lacazette departed the Emirates Stadium this summer and has returned to Lyon on a free transfer.

The 23-year-old Odegaard has been the captain of Norway since March 2021 and has plenty of experience in taking on the responsibility. There were also rumours that left-back Kieran Tierney could be Arteta’s choice.

But Odegaard has taken it on after publicly making a bid for the armband on a permanent basis. Earlier this summer, he told journalists that he would be happy to succeed Aubameyang.

He said: “It’s not something I think about. I think about the future, and to make that as good as possible, so we’ll see what happens. I always enjoy responsibility. I’m captain for my country (Norway) and it’s a nice experience, so I enjoy that.

“I don’t know anything about the situation here, I think that question is for Mikel (Arteta) and the club, but if he asked me of course I would be happy to do it. I think you will see a hungry Arsenal team coming back now.

“I think we learned that we need to be sharp in every situation in every game. This league is so tough so you need to be at your best every time you play. We have to use that in a good way. We need to use that anger and disappointment and take it into this season and show that we have improved, we have learned, and hopefully we can do that now.”