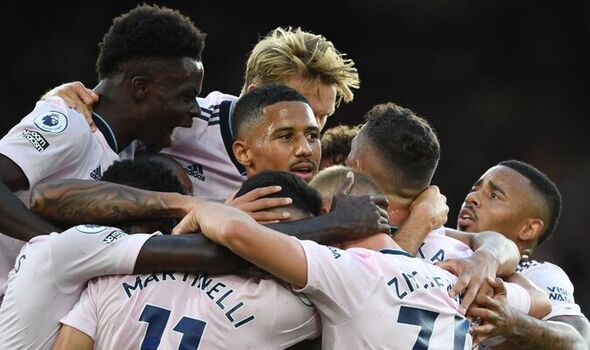 Arsenal have made it their very own personal mission to tie down a number of Mikel Arteta’s exciting shining lights to new contracts after 24-year-old centre-back Gabriel Magalhaes put pen to paper on fresh terms until the summer of 2027. The Brazilian, who is hoping to consolidate a late push for the Selecao World Cup squad, has formed an impressive partnership with William Saliba at the heart of the Gunners’ defence this season and the club’s faith in the player has now been rewarded with a bumper new deal that will see him extend his stay in north London by an additional two seasons.

Gabriel was signed from Lille for a fee of £27million in 2020 and now he has committed his long-term future to Arsenal amid interest from Juventus and Barcelona, respectively.

But as far as Arsenal are concerned, the hard work does not stop there with discussions already underway and ongoing with Bukayo Saka, Saliba and Gabriel Martinelli over new contracts as the Gunners seek to build on their breathtaking start to the 2022/23 campaign that sees them sit four points clear at the Premier League summit.

Saka’s new contract – a complex and delicate negotiation – is understood to be the most advanced of the three with an agreement now seemingly close with the England international winger.

Arsenal remain convinced that their Hale End poster boy is the future of the club and it’s no surprise to see the likes of Liverpool and Manchester City reportedly lingering in the background due to his remarkably mature and consistent performances in north London since he broke into the first-team picture under Unai Emery in the 2019/20 campaign.

However, there is confidence that Saka, who is a shoo-in for Gareth Southgate’s England World Cup squad for Qatar, simply has no interest in a move elsewhere as the two parties edge closer to a positive conclusion.

Any new deal for Saka will be reflective of his importance to Arteta’s side and is expected to make him one of the club’s highest earners.

Meanwhile, Saliba, whose current deal is up in the summer of 2024, has confirmed his representatives are in talks with Arsenal over a new deal. “We will see. They talk a little bit. We will see,” the Frenchman recently declared, after helping Arsenal beat Tottenham 3-1 in the north London derby earlier this month.

Barcelona are believed to be keen on signing the ball-playing central defender, who has taken to the Premier League like a duck to water this season following a slow integration process that has required huge patience following three Ligue 1 loan spells with Saint-Etienne, Nice and Marseille.

Now Arteta and Edu are determined to reward his stunning early-season form with a lucrative new contract that once again reflects his importance at Arsenal.

Arsenal have also opened talks with Martinelli over extending his contract and the Brazilian has already outlined his desire to stay at the Emirates in a welcome boost for the Gunners.

“Of course, I want to stay,” Martinelli said after netting in the 3-2 win over Liverpool. “We are talking. Let’s see what is going to happen, but I want to stay, of course.

“I think it’s my best season here at Arsenal. I’m so happy for this moment. I think Arsenal is a big club and we have a lot of good players. I think you guys can see from the outside our hunger and our mentality. We want to win every single game and I think everyone can see that.

Arsenal are understood to have one-year extension options on Saka and Saliba’s current deals, while they can extend Martinelli’s contract by an additional two years – should they please.

“I’m very happy to sign this new contract with Arsenal because it’s such a big club,” he said. “It’s my dream and today is the best day of my life. I’m so happy to extend my contract here.

“Every game the supporters are pushing the team in the stadium. It’s why I’m so happy to stay here. Arsenal is my home.