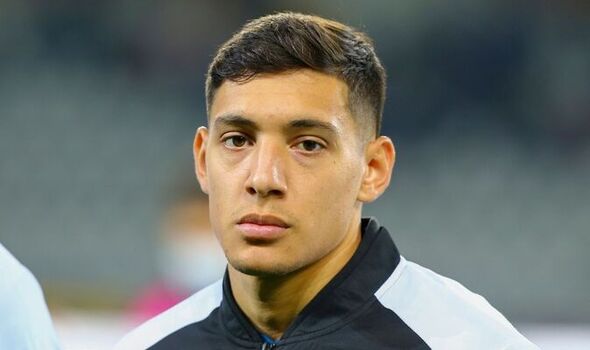 Arsenal have a potential swap deal card up their sleeve in the form of Pablo Mari if they are to enter the running for Udinese right-back Nahuel Molina, who is attracting the interest of several top clubs this summer. The Gunners are understood to be tracking the Argentine international and the 24-year-old has quickly developed a reputation as one of the best players outside of the top clubs in Serie A.

Molina was signed from Boca Juniors in 2020 and already has 15 caps under his belt after making his international debut in 2021.

He is now on course to make Argentina’s World Cup squad for Qatar, as his stock continues to rise.

According to Il Messaggero Veneto, Arsenal are interested in signing Molina to bolster their options at right-back.

The report claims the Gunners also have a trump card to play in negotiations in the form of Pablo Mari.

The Spaniard has spent this season on loan at Udinese and would ideally like to stay with the Serie A outfit.

Udinese’s sporting director Pierpaolo Marino recently conceded that the club may not be able to keep Mari.

He said: “Mari is an Arsenal player, it is already unusual for such a player to come to Udinese.

“Not because we don’t deserve it, but because, in general, the path is the opposite.

“It will be difficult to keep him, but we will try.”

The Gunners have had to field Cedric Soares at right-back for large parts of the season due to Takehiro Tomiyasu’s lack of availability.

A persistent calf problem has seen the Japanese international miss a significant percentage of the campaign.

Therefore, a right-back will be one of the club’s top priorities this summer when the transfer window opens.

Tino Livramento was one of several options being assessed by the Gunners but the Southampton full-back will now miss the remainder of 2022 after suffering anterior cruciate ligament damage.

Tariq Lamptey and Max Aarons are among other options that could fall under consideration.

Hector Bellerin is expected to depart which will enable Arsenal to generate some cash.

The Spaniard would like to make his loan spell with Real Betis permanent at the end of the season.