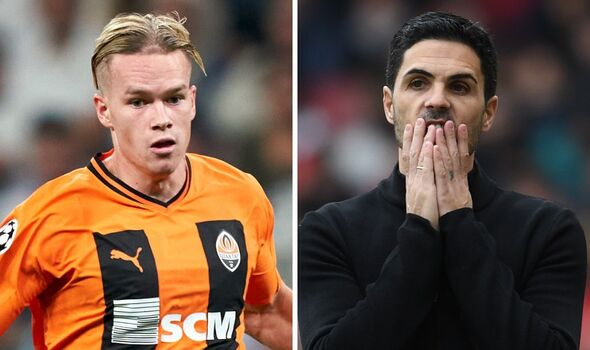 Arsenal have reportedly fallen £30million short in their first bid for Mykhaylo Mudryk with Shakhtar Donetsk using Antony’s move to Manchester United as the benchmark in negotiations. The Gunners are looking to make a big splash in the January transfer window to try and maintain their momentum at the top of the table.

Gabriel Jesus’ injury means Mikel Arteta is short of options in attack and Arsenal are looking to boost their depth in the January window. Mudryk appears to be the top target and Arsenal have already lodged a bid worth in the region of £55m.

The 21-year-old has burst onto the scene over the past 12 months, quickly earning a reputation as one of the most talented wingers in European football. He’s established himself as a regular for Shakhtar this season, scoring 10 goals and providing eight assists in 18 games.

Mudryk grabbed everyone’s attention in a man-of-the-match display in Shakhtar’s opening Champions League group game of the season in their 4-1 win over RB Leipzig. He’s been strongly linked with a move to the Emirates since and has even teased fans that his preference would be to join Arteta’s squad.

Mudryk even posted footage of himself watching Arsenal’s Boxing Day win over West Ham on Instagram. But Arsenal will have to vastly improve their offer to Shakhtar if they’re to get their No 1 target next month.

According to Sky Sports, the Ukrainian club value Mudryk at ‘over £85m’ and regard him as one of the ‘top five wingers in the world’. Arsenal’s first bid falls £30m short of that valuation, but it’s suggested United’s signing of Antony this past summer also has something to do with it.

Shakhtar believe Mudryk is more valuable than Antony, who United signed for a whopping £85m. They’re now using that transfer as a ‘benchmark in negotiations’ with Arsenal, which could price the Gunners out of a move.

United raised eyebrows when they made Antony their second-most expensive signing. It was a similar case when United paid big money to sign Lisandro Martinez from Ajax too a few weeks earlier.

Clubs pay close attention to the transfer market to determine where the value lies, particularly when comparing their own players to big-money transfers. And it seems as though Antony’s £85m move to Old Trafford could end up costing Arsenal in the long run.