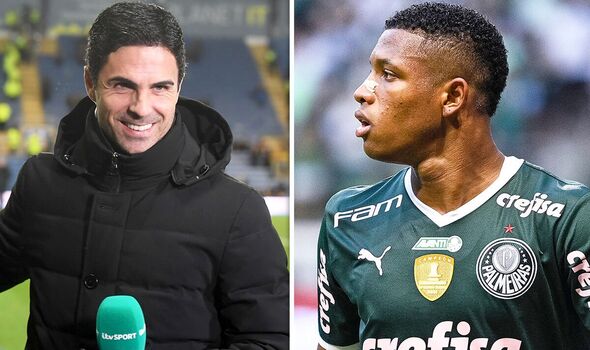 Arsenal could sign Brazilian midfielder Danilo for as little as £17.6million if they reignite their interest in the player, according to reports. Nottingham Forest are hoping to secure a deal for the 21-year-old in the coming days but a transfer has not been finalised yet.

Arsenal’s interest in Danilo emerged last summer. Palmeiras were not willing to sell the player during their domestic season.

Danilo remained with the Brazilian outfit and helped them win the top flight. The Gunners continued to be linked with the defence-minded midfielder in the months that followed.

But they have cooled their interest in him in recent weeks as they focus their attempts on signing Shakhtar Donetsk winger Mykhaylo Mudryk. Danilo looks set to get his move to England, with Forest closing in on the player.

However, the price could be something that pricks up the ears of the Arsenal hierarchy. Transfer expert Fabrizio Romano says Forest held talks with Palmeiras through the night on Tuesday in order to secure an agreement.

Monaco are also keen but it appears Forest are set to win the race. Romano says the final fee is set to be around just £17.6m (€20m).

It was reported last summer that Palmeiras were not willing to listen to offers less than £30m. But perhaps Arsenal could look at a deal again now their asking price has been reduced.

Mudryk remains the top target for Arsenal in this window. The Gunners have already submitted two bids to Shakhtar and are edging closer to an agreement with the Ukrainian club.

Mudryk has made it clear he wants to join the Gunners but a fee is yet to be agreed. Arsenal are also in the market for a striker but are set to miss out on Joao Felix to Chelsea.

A midfielder is not a priority for Mikel Arteta in this window. Interest in Youri Tielemans has also diminished, with the Leicester star likely to be available on a free transfer in the summer.

Danilo’s style of play would make him back-up and competition to Thomas Partey at the Emirates. But currently it appears as though Arsenal are not yet ready to make a move and Forest are set to make him their second January signing.

Steve Cooper’s side have already signed one player from Palmeiras. Gustavo Scarpa became a Forest player at the beginning of the month after a deal was completed in December.