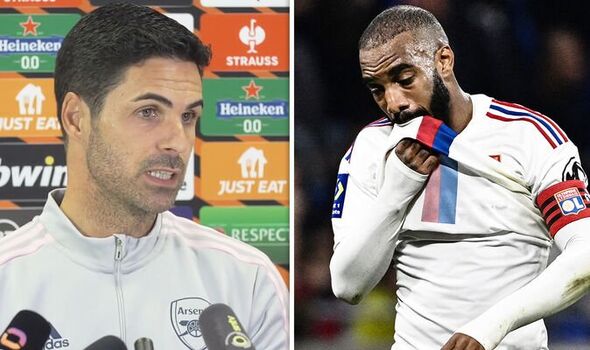 Arsenal manager Mikel Arteta took a needless dig at his former striker Alexandre Lacazette at his press conference on Wednesday. Arteta singled out a miss the Frenchman made in last year’s 4-0 loss to Liverpool at Anfield.

The Gunners boss was asked if managers’ behaviour on the touchline can influence a result of a match. Arteta and Jurgen Klopp clashed during the game in November 2021 when the score was at 0-0.

The Anfield crowd was noticeably louder after the incident. Arteta isn’t sure if that had an impact and instead said the game would have been different if Lacazette had scored a golden opportunity for his side.

Arteta said “I don’t have a clue. If we would’ve scored when we had a one v one situation with Lacazette, it wouldn’t have affected it.

“But because we conceded that set-piece and then what happened happens [in the] second half, it did. So I don’t know.”

Lacazette left Arsenal at the end of his contract in the summer. He has already scored six Ligue 1 goals for Lyon this term, more than he managed for the Gunners in his final campaign in the Premier League.

The behaviour of managers has been a topic of debate this week after Klopp was sent off late on in Sunday’s 1-0 win over Manchester City. Arteta insists there is a responsibility to behave but admits he may have crossed the line at some points.

He said: “We do have a responsibility. Not only with the referees but with the game, the way we want to get this game player and respect it.

“Obviously to talk about other managers, I have enough just looking after my own behaviour and trying to do the right things for our club. But yes it is very intense, it gets heated, there are moments like in the last few games where you see many, many incidents when VAR has to step in and there’s a lot of controversy and a lot of moments where the result is in the air because it’s depending on a decision.

“It’s not easy to manage but of course we have a huge responsibility on that. If I have to watch myself on a camera after [a game] probably there is things I would do different but once you are there and the way you talk, even to your own players, a lot of the time you would do it differently.

“We are all conscious of it but sometimes the heat of the game takes you to behave in certain ways.”