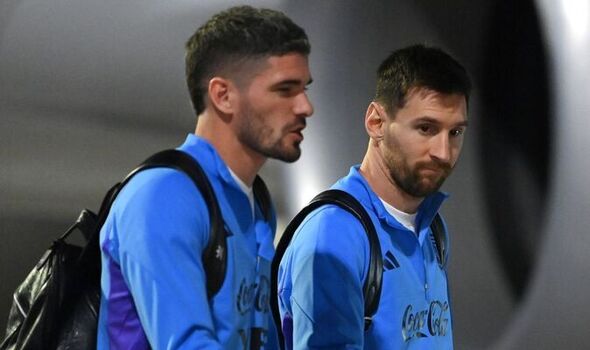 Lionel Messi has decided he wants to room alone at the World Cup in Qatar with Argentina following Sergio Aguero’s retirement. The Paris Saint-Germain superstar is gearing up for his fifth tournament with the national team and this time he is determined to make his mark after admitting this will be his final World Cup before retirement.

Messi first featured on the world stage back in 2006 in Germany before going on to play for Argentina in South Africa, Brazil, Russia and now Qatar.

He won Player of the Tournament in 2014 before suffering final heartbreak in extra-time against Germany at the Maracana.

The 1-0 defeat is a stain on Messi’s otherwise immaculate record as he bids to follow up Argentina’s Copa America success with a World Cup winners’ medal.

But he will have to do it this time around without roomie Aguero, who was forced to call time on his career in December 2021 after being diagnosed with a cardiac arrhythmia.

Messi, who is the godfather of Aguero’s son Benjamin, has a very special relationship with the former Manchester City striker and they have been virtually inseparable at international level since 2005.

The pair have always shared a room together at major tournaments, including the World Cup in Brazil when Argentina came narrowly close to lifting the trophy.

But little did the pair know, the 2021 Copa America would be the last time the attacking duo would share a room together following Aguero’s healthcare.

According to Argentinian reporter Gaston Edul, Messi has since decided he won’t be replacing the centre-forward in Qatar.

He has instead decided to continue rooming alone so he can ‘concentrate’ on the task at hand.

Heading into the tournament, there has been lots of speculation in Messi’s homeland regarding who would receive the nod but the PSG star is so desperate to win the World Cup, he wants his own space.

It speaks volumes about his own personal mission to win the one trophy that has eluded him his entire career. Glory in Qatar would be the icing on the cake for the 35-year-old, who has always dreamed of winning the World Cup.

Aston Villa goalkeeper Emiliano Martinez will be rooming with one of the coaching staff, which ensures the other 24 Argentina players will be placed into pairs when it comes to sleeping arrangements in Doha.

Messi has struck a great friendship with compatriot Leandro Paredes at PSG but the midfielder appears to have been snubbed by his club team-mate.

Atletico Madrid’s Rodrigo De Paul is also believed to be close with Messi but the Barcelona icon will be rooming alone.

The veteran has won 165 caps for his country to date and he ultimately controls the Argentina dressing room as captain.

Argentina thrashed UAE 5-0 in their final warm-up game in the Middle East before their opening group match against Saudi Arabia next week.

Messi was on target in the one-sided victory and managed to shake off a brief injury scare.

He believes England are among his favourites to win the tournament, as he revealed in an interview with South American Federation CONMEBOL: “Whenever we talk about candidates, we always talk about the same teams.

“If I have to put some above others I think Brazil, France and England are a little bit above the rest. But the World Cup is so difficult and so complicated that anything can happen.”