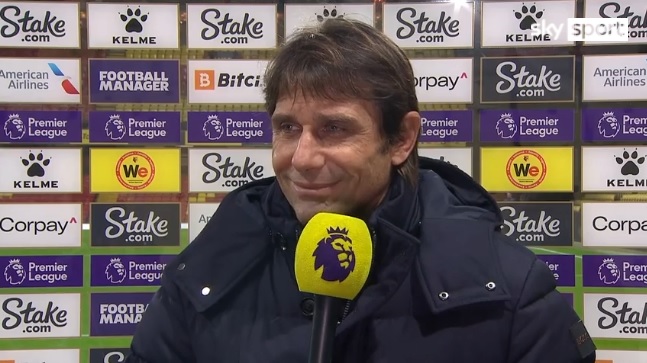 The Belgian forward has angered Thomas Tuchel this week after he publicly aired his frustrations at Chelsea and made it clear that he is keen to return to Inter at some point in his career.

Lukaku also admitted that he was targeting a move to Real Madrid, Barcelona or Bayern Munich before returning to Chelsea in a £97.5 million deal last summer.

Lukaku has made no secret of love of Conte, revealing that he still keeps in regular contact with the Italian and backed him to repeat the Serie A success he had at Inter with Tottenham.

When asked about Lukaku’s current situation at Chelsea following Spurs’ victory over Watford on Saturday, Conte made it clear that he still supports the striker.

‘Romelu is a player from another team,’ Conte told Sky Sports Italy.

‘You know the affection I have for him but I am not talking about players from other teams even though I have a great deal of affection for him and that will always be there.’

The Chelsea manager is understood to be weighing up the decision to drop Lukaku for Sunday’s Premier League match against Liverpool, while the striker could also be fined for giving the interview which caught the club by surprise.

‘I don’t like it because it brings noise that we don’t need. It’s just not helpful,’ Tuchel said of Lukaku’s interview on Friday.

‘On the other side, we don’t want to make more out of it than it actually is. You know very well how it is, it’s very easy to take lines out of context. It’s very easy to shorten lines and make headlines, then later realise that it’s not so bad and maybe not what he meant.

‘But let’s be honest that we don’t like it.

‘I don’t feel him unhappy. I feel him the exact opposite, that’s why it’s a surprise.

‘But I’m the wrong person to ask.’