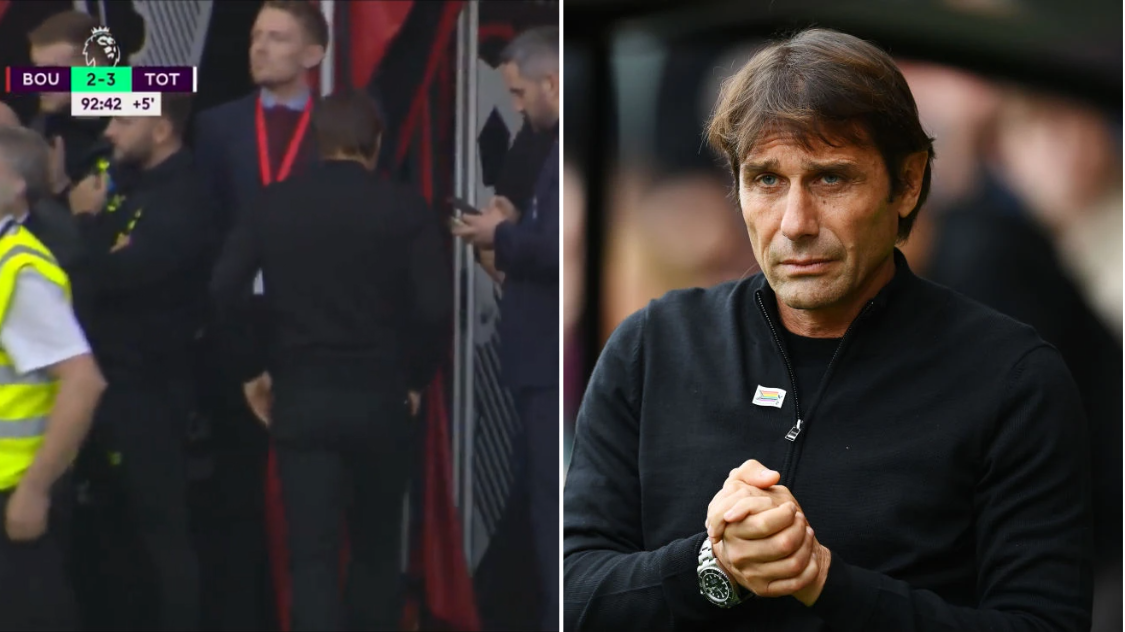 Antonio Conte says Tottenham’s VAR drama in the Champions League in midweek was the reason behind his non-celebration against Bournemouth, with the Italian walking down the tunnel after Spurs’ late winner.

The north Londoners delivered a lacklustre and error-ridden first-half performance on the south coast on Saturday afternoon and fell two goals behind after a brace from Kieffer Moore.

But they upped the intensity and quality in the second period and got back into the game through Ryan Sessegnon before Ben Davies levelled the scores from a corner.

Tottenham were a constant threat from set-pieces in the match and netted their stoppage-time winner from their 19th corner, with substitute Rodrigo Bentancur’s initial effort blocked before he fired home the rebound to secure a 3-2 win and all three points.

Conte is usually known for his wild celebrations on the touchline, but when Bentancur’s shot hit the back of the net he did not celebrate at all, simply turning around and walking down the Bournemouth tunnel.

He has now revealed that he was wary of celebrating the goal after what happened on Wednesday night against Sporting, when Harry Kane’s late strike was ruled out for a controversial offside and the Italian was sent off, but did return to the dugout when he knew Bentancur’s goal was legitimate.

Asked about his unusually muted celebration, Conte said: ‘I came back when I knew the goal was regular.

‘I thought in my mind and my heart I can have a heart attack because in two days to score and then have the goal disallowed.

‘I said I go down [the tunnel] and then stay calm and then I wait for the decision of the referee. But for sure it was great to see the desire of my players and the reaction they had.

‘I repeat also the nastiness they put into the pitch because I have seen in the eyes of my players the desire to win this game.

‘Also when we drew 2-2 and then in our mind the only thought was to take the ball and start to play again. This reaction was really positive and I want this from my players.’

Reflecting more on the game, he continued: ‘I don’t want to think what my mood would be if we lost this game!

‘I have to be honest and also after the first half my feeling was positive. The only situation I ask of my players is to show our personality and take more responsibility because the game was on us.

‘In the second half despite conceding the second goal, we started to play nasty, with a will and desire. To not only move the ball and show we are good and nice but in an effective way.’