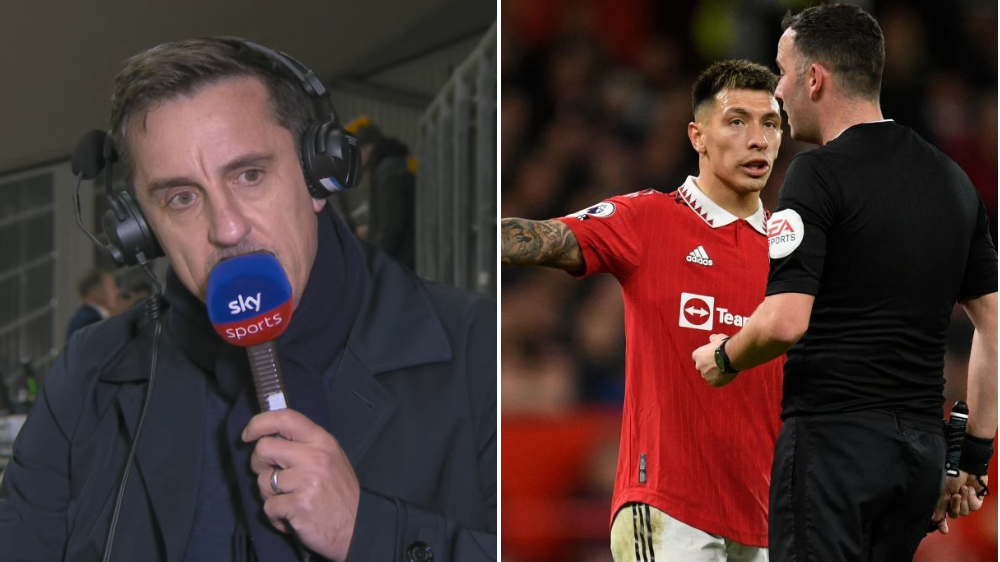 Marcus Rashford scored his 100th goal for United as the Red Devils secured a narrow win over West Ham at Old Trafford on Sunday.

While Manchester United were on top for large periods, they resisted a late onslaught from David Moyes’ Hammers, with goalkeeper David de Gea producing a number of saves and United’s defence impressing.

Neville was particularly impressed by United summer signing Martinez, telling Sky Sports at full-time: ‘They all contributed out there. They’re all going to De Gea but Dalot, Martinez, Maguire and De Gea in that last 15-20 minutes were outstanding.

‘David Moyes must wonder what he needs to do to win a game at Old Trafford. He can’t believe it.

‘It wasn’t a good performance from Manchester United in terms of football, but in terms of spirit, hanging in there and defending their box, they’ve done that really well.

‘Lisandro Martinez was absolutely fantastic for large parts of that game.’

Goalscorer Rashford said: ‘I don’t think we played at our best today but if we want to reach our ambitions for the season, we’re going to have to win games like that.

‘We want to perform better but it’s nice to win in that way as well. David [de Gea] was excellent today.’

On his 100th goal, Rashford added: ‘It’s been on my mind for the past couple of games but we’ve been winning games so I’ve been happy and just been waiting for it to come.’

Manchester United goalkeeper David de Gea, meanwhile, said: ‘It’s a great win for us. If we want to achieve and be in the top places we have to win games like this today.

‘We are pressing well and recovering the ball well high up the pitch. We conceded some chances at the end but West Ham are a great team. I’m really happy to be honest.

‘We had a difficult start to the season, Man United is a massive club and we are getting better. We can keep more clean sheets, play well and keep going until the end.’