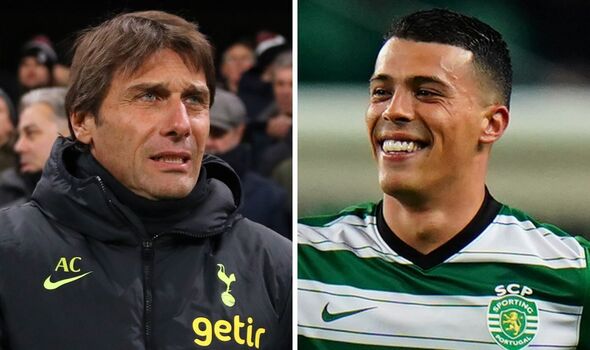 Tottenham boss Antonio Conte has so far been frustrated at the lack of new faces arriving at the club in the January window despite being linked with a host of players. The priority heading into the mid-season transfer market was reportedly to sign a right-sided defender along with at least one other attacked – preferably two.

Matt Doherty and Emerson Royal have both failed to convince the Tottenham boss that they’re capable of holding down the spot on a regular basis. Djed Spence arrived from Middlesbrough last summer, but he too has failed to win over Conte.

It’s a position that has been extremely important to Conte’s successes at both Chelsea and Inter Milan in recent years. Denzel Dumfries, Malo Gusto, Pedro Porro and Vanderson have all been linked with moves to Tottenham in recent weeks.

They’ve also been lacking goals up front outside of Harry Kane with summer signing Richarlison failing to score since September. Express Sport takes a look at what the best-case scenario would be for Conte in the final days of the transfer window.

Full-backs used to be available as cheap options in the market, but things have changed in recent seasons with their prices skyrocketing. The likes of Trent Alexander-Arnold, Reece James, Achraf Hakimi and Joao Cancelo have changed the way full-backs are seen with their value now being reflected in the market.

It’s proving to be a sticking point for Tottenham though in their search for a right-sided defender. Sporting Lisbon star Porro appears to be the top target, but the Portuguese side are refusing to budge on their £40million valuation.

An offer of £32.5m has been rejected by Sporting, but they seem willing to continue negotiations. Conte will want the deal done before the January window closes and it looks as though Tottenham will have to work out a way to pay the full £40m asking price.

After a promising start to life in north London, Richarlison has fallen down the pecking order under Conte. He’s yet to start a game since returning from the World Cup with an injury, but it’s his lack of goals which is causing concern among Tottenham fans.

The Brazilian is yet to rediscover the kind of form that earned him a big-money move to Tottenham last summer. Spurs remain the third-highest goalscorers in the Premier League, but no attacker outside of Harry Kane and Son Heung-min have found the net more than twice.

Another attacker is wanted in the final few days of the window with Arnaut Danjuma set to join after Tottenham snuck in ahead of Everton, but the likes of Harvey Barnes, Ismaila Sarr and Brazilian winger Tete continue to be linked. None would come cheap though, meaning Tottenham will likely have to stump up big money once again to bring in attacker for Conte.