Wallabies coach Dave Rennie is urging Australian officials not to abandon Super Rugby Pacific, saying it’s important for the development of his players that they continue to face New Zealand sides.

McLennan said in a later interview that RA would fulfil its 2023 Super Rugby Pacific commitments but hinted an all-Australian competition could be launched after that.

Rennie is adamant the model that will benefit the Wallabies the most is the current one, in which Australian sides battle the might of New Zealand’s best. 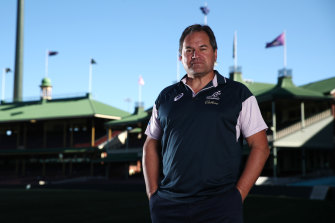 Some observers believe McLennan’s threats have been made merely in a bid to secure a larger slice of broadcasting revenue. New Zealand Rugby is believed to collect more than $90 million from the current broadcast deal, roughly three times the amount received by RA.

“I understand Hamish is an innovative thinker. From a commercial point of view, (Rugby Australia) want a bigger slice of the pie. So I understand his thinking,” Rennie said.

“But I think what a lot of New Zealand clubs will think, too, is that us playing Trans-Tasman games are good for us. We’ve just got to make sure financially it’s beneficial as well.”

The Wallabies are currently in camp on the Sunshine Coast to prepare for the three-Test series against England which kicks off in Perth on July 2.

England coach Eddie Jones is under a mountain of pressure following a run of poor results, which included Sunday’s 52-21 loss to the Barbarians.

Although England were missing their star players from Leicester and Saracens, the result has triggered major alarm ahead of the tour of Australia. Rennie isn’t reading anything into the result.

“I’ve seen the score. But the squad they bring over will be no resemblance to that group,” Rennie said. “They had a lot of their key players playing on the weekend (in the English Premiership final). Once they name their squad I’ll take a bit more interest.”

Wallabies prop Taniela Tupou is no certainty to play in the series opener as he recovers from a calf injury.

Watch every match of the July Test Series on the Home of Rugby, Stan Sport. Kicks off Saturday 2 July with Wallabies v England, New Zealand v Ireland, South Africa v Wales and Argentina v Scotland. All streaming ad-free, live and on demand only on Stan Sport.