The 2023 FIFA Women’s World Cup is set to leave seven NRL clubs without a home ground for up to a third of next year’s rugby league season.

The Herald can reveal FIFA has exclusive use of Accor Stadium (Stadium Australia), Sydney Football Stadium, Brisbane’s Suncorp Stadium and Melbourne’s AAMI Park for up to nine weeks, in blocks from June to August next year. 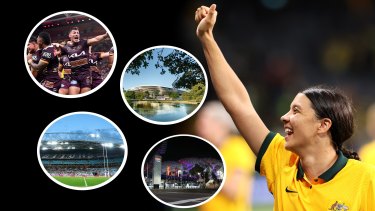 The NRL will be without four of its major venues for a third of the season next year as Sam Kerr (pictured) and the Matildas take centre stage for the 2023 Women’s World Cup.Credit:Getty

Leichhardt Oval has also been listed as an official training venue for the tournament, meaning the Wests Tigers will be unable to use the ground for an extended period as well.

FIFA will take over venues four weeks before the first game at the ground, meaning different stadiums will be affected for different time frames, depending on whether they host pool games or only finals, such as Accor Stadium. Suncorp Stadium will be booked out for nine weeks, AAMI Park for eight weeks, the Sydney Football Stadium for seven weeks and Accor Stadium for six weeks.

The venues are under FIFA’s control for five days after the last game, as well, but stakeholders are negotiating for this to be cut back. 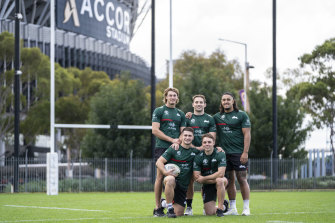 The Rabbitohs won’t be able to play at Accor Stadium in July and August next year.Credit:SMH

“We are working with state governments, stadiums and impacted clubs about options that best suit them and their fans during the period where home venues are offline,” NRL chief executive Andrew Abdo said.

“There will be additional complexities and challenges with next season’s draw, but the NRL and clubs will be innovative and work together as a game to ensure the best possible season continuity during this period.

“We’ll certainly be taking into consideration the stadium availabilities as we formulate the schedule for next year, but I’m sure all clubs will understand that there will be added constraints.”

Under the agreement signed with FIFA when Australia and New Zealand won the bid for the 2023 World Cup, the government agreed to hand over match and training venues for up to a month before the tournament, which starts on July 20 and ends with the final at Accor Stadium on August 20.

The scheduling clash may also impact the State of Origin series. The NSW Blues are due to host game three of the next year’s series, which was pencilled in at Accor Stadium.

However the Sydney Olympic Park venue, as well as the Sydney Football Stadium, will be out of action for the match, which is traditionally played in the middle of July.

One option would be to switch the match from game three to game two, but the Herald understands that the NRL’s deal with the South Australian government for next year’s game in Adelaide has to be for a live game, not a potential dead-rubber.

Switching with game one at Suncorp Stadium won’t fix the problem because it is also part of the FIFA no-go zone.

When it comes to the regular NRL season, head office is already in dialogue with the clubs affected to determine what the best course of action is. Options include:

“We all acknowledge there’ll be a great deal of disruption across Queensland, NSW and Victoria,” South Sydney Rabbitohs chief executive Blake Solly said.

“We will work with the NRL and stadiums to make sure we get the best result for our members and fans, but we can’t ignore the fact that it is going to be almost two months when we are all going to face a lot of challenges.”

Some clubs, like the Broncos and Storm, already have commercial deals in place with their respective venues, locking them into a certain number of games per year.

Clubs like the Rabbitohs have the flexibility of playing up to three matches away from Accor Stadium each year and are already planning on taking games on the road during that period.

The AFL won’t be affected by the Women’s World Cup. The AFL, in partnership with the Victorian Government, decided against making the Melbourne Cricket Ground available because it didn’t want to displace the four clubs – Collingwood, Richmond, Melbourne and Hawthorn – that use the venue as a home base.