Siosiua Taukeiaho went blow-for-blow with Penrith’s premiership-winning pack in his last start and ranks among the NRL’s form front-rowers.

But he didn’t fancy his chances down the line against the Roosters next generation of big men, and couldn’t fathom lining up opposite the red, white and blue that has been his rugby league life.

Taukeiaho is bound for the south of France and Trent Robinson’s old Catalans club next season on three-year marquee deal.

Early interest from Wayne Bennett and the Dolphins was rebuffed by the 30-year-old Tongan international, who is all-in on his European sea change despite hitting rare heights in recent weeks.

His game-high 217 running metres and 39 tackles against the Panthers before the Roosters’ bye were only slightly above par for Taukeiaho’s past month – which has yielded an average of 177 metres and 36.5 tackles despite four consecutive losses.

His 150 metres a game this year sit behind only Payne Haas, Addin Fonua-Blake and Joseph Tapine among NRL props, and have gone to another level while fellow warhorse Jared Waerea-Hargreaves has been out injured.

So why is he leaving the NRL behind with so much still to offer?

“I didn’t look too much [at staying] because I felt like my body is getting old and there’s some young players all coming up and playing good footy,” Taukeiaho said ahead before a critical clash with St George Illawarra on Saturday.

“I think it’s just the best for myself to finish strong here and then try something new.

“There’s a few players that have been around like Egan Butcher but there’s other guys who are still playing for the Bears (the Roosters’ feeder club) like Tuku Hau Tapuha.

“They’re still developing but give them another couple of years and they’ll be playing first grade so those are the dudes that I wouldn’t want to compete with. 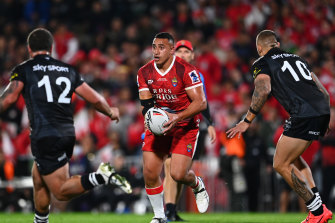 Taukeiaho will still be available for Tonga while playing in the Super League.Credit:Getty

“I thought it was best that I hang the boots [up] there, move to France and let those dudes take over.”

Asked if he had explored the chance to stay with an NRL rival, Taukeiaho said he couldn’t see himself lining up against a Roosters team he has won two titles with across the course of 164 games.

His Super League shift was also coloured by the hamstring injury he played through for a month last season, and the knee issue that sidelined him just one minute into the Roosters’ finals campaign.

Twelve months has made one hell of a difference in the form and fitness stakes, but Taukeaiho is comfortable with his call. 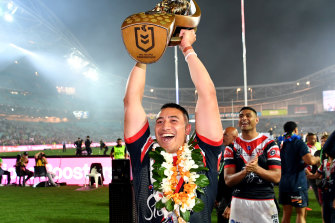 Provided he can help lift the Tricolours out of the 2022 malaise that has them 10th on the ladder and in desperate need of a win over the ninth-placed Dragons.

“This club took us [in] with both hands and made us feel welcome,” Taukeiaho said.

“I’ve been here for eight years and didn’t really see myself at any other club.

“Moving to France I’ve got good mates over there – (Dylan) Napa, Mitchell Pearce and [coach] Steve McNamara. I spoke to Robbo about France because he’s coached there as well.

“I’m excited to have my future sorted but I want to create more memories at this club before I leave.

“I’m happy with my form at the moment but I know I’ve got more in me, especially as it’s my last year and leading into the back end … I want to finish it off strong.”