The problem with rugby league is you need to assume everyone is telling you a lie — even those you trust the most — because most of the time they are.

The problem for Braith Anasta is he’s an exception to this rule: brutally honest, straight down the line, a man of integrity. He’s never been any different, stretching back to his days as a player.

It’s a problem because Anasta is juggling the dual roles of NRL 360 co-host and manager of Cameron Munster, the Melbourne, Queensland and Australian five-eighth.

Call it tension, call it animosity, call it whatever you like, but the relationship between the Storm and Anasta – and, by extension, Munster – is becoming an issue.

Munster isn’t off contract until 2024 but the laissez-faire player market, and the entrance of an aggressive new franchise in the Dolphins, headed by a giant in Wayne Bennett and savvy old recruiter in Peter O’Sullivan, means the chatter about his future is becoming a dull roar.

The speculation cranks up each time Anasta is asked almost nightly on Fox Sports about Munster’s future, and his honest responses are turning people purple with rage about a “conflict of interest”. 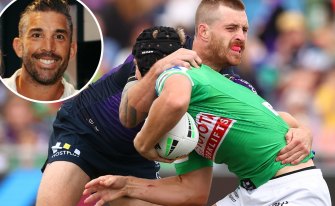 Cameron Munster is in no hurry to settle his playing future, says his manager Braith Anasta (inset).Credit:Getty, supplied

There aren’t many former players who work in the media who don’t have a conflict of interest, whether they work for Fox Sports or Channel Nine (publishers of this masthead, something the Herald points out after Fairfax Media merged with Nine so we’re transparent about – you guessed it! – any perceptions about a conflict of interest).

If the game can swallow Peter V’landys being chief executive of Racing NSW and chairman of the ARL Commission — in other words, running two major sports at the same time doing deals with the same commercial partners — surely it can stomach Anasta on NRL 360.

Why are people getting so bent out of shape about him talking about Munster’s contract negotiations live on air?

The cards are laid on the table each night, for all to see, living and dying by the words he speaks. It’s better than, “Yeah, nah, you know I can’t say much because I am Cameron’s manager.”

And it’s a refreshing change from most player managers, chief executives, chairs, football managers and coaches who shovel bullshit by the truckload to reporters, all of it off the record, telling outright lies or distorting the truth, knowing many will print or air it, and more so nowadays in the pursuit of clicks and subscriptions and ratings and likes and follows …

Few seem to be getting as cranky about Anasta talking about Munster’s contract negotiations as the Storm.

This from chief executive Justin Rodski to AAP: “We understand the interest in Cameron’s future, but I think it’s a good thing that a player and his manager shouldn’t be talking about moving when the player is contracted for the next two years, that’s a non-negotiable in my mind … The Melbourne Storm haven’t provided permission for Cameron Munster’s management to talk to other clubs about an early release. We’re not getting caught up in what’s been said or hasn’t been said.”

This from recruitment manager Paul Bunn to Wide World of Sports: “We have had informal chats and Cameron has indicated that he would like to stay with us. But we know his manager is hunting other clubs.”

Good to see two people from the Storm speak on the record instead of peddling information off it, but a couple of observations, all of which are entirely my own:

Why would Anasta need to “hunt other clubs” for the best player at the Storm and, on his day, the entire NRL? I’d assume the Australian and Queensland five-eighth would have clubs knocking down his door. And they are.

As for him potentially leaving a season early, that noise is coming from the Dolphins, who are desperate for a marquee signing for their inaugural season, hence the interest in Munster and Knights fullback Kalyn Ponga.

Anasta has made it clear on Fox Sports that Munster is contracted until the end of 2023, on $1.25 million, so “there’s no rush” to extend or sign elsewhere. That’s hardly using his “platform” – that’s just common sense.

But you can understand the need from Anasta to consider all options if reports the Storm have offered Munster just $750,000 a year from 2024 are true. If that’s all Melbourne are prepared to pay, Munster has every right to speak to other clubs and ask for a release a year early if the money’s right, just as the Storm have every right to knock it back.

Clubs have short memories. They want contracts honoured to the letter when it suits – but will push players out, telling them they’re free to go elsewhere, immediately, when it doesn’t.

The problem for Melbourne is the chatter about Munster won’t go away, no matter how much they smother it.

But if they don’t like what he says, they can take the same simple course of action as anyone who doesn’t want to watch NRL 360.

Change the channel to Nine … publisher of this masthead!