Essendon great Matthew Lloyd has slammed the Bombers for not standing up to Sydney’s show of disrespect and called on his embattled former club to draw a line in the sand after their heavy loss to the Swans.

As Dons coach Ben Rutten took aim at his on-field leaders for not being up for the fight, Lloyd condemned the Bombers for allowing themselves to be “walked all over” by their rivals, failing to fly the flag on at least two occasions on Saturday night.

Lloyd was fuming there were no repercussions for Luke Parker after the Swans captain mocked Dylan Shiel in an apparent taunt at the midfielder’s and Essendon’s lack of physicality at the contest.

The goalkicking great was also furious at the lack of blowback towards young Swan James Rowbottom after he bowled over reigning club champion Zach Merrett in a bump where there appeared to be head-high contact made. 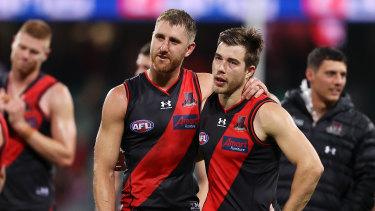 Dyson Heppell and Zach Merrett laid one tackle between them.Credit:Getty

The Dons’ poor performance in the 58-point loss showed the win over Hawthorn the previous week was an aberration rather than a sign they had turned the corner, and leaves their season in disrepair with a 2-7 record. They play resurgent Richmond in the marquee Dreamtime game on Saturday night.

Lloyd was angry Shiel did not mete out instant retribution towards Parker at the centre bounce after the taunt, even if it had cost his team a free kick.

“I would have ploughed straight through Parker … and got him to the ground and said ‘you will never ever treat me like that again’. I wouldn’t have cared what happened.

“Dylan Shiel isn’t that type of player to do it, but I would have loved if someone else did it on his behalf. I reckon this will be something Ben Rutten will show and say ‘this is how you are viewed, Dylan, and how us as a team are being viewed’. Where’s the nastiness gone?”

Lloyd was dismayed no Essendon player remonstrated with Rowbottom for his hit on Merrett.

“Who goes at Rowbottom, has a crack at him? Nobody,” Lloyd said. “It’s every man for themselves.”

Asked if it was time for the Bombers to “draw a line in the sand,” Lloyd said: “spot on.”

The infamous match between Essendon and Hawthorn in 2004 is known as the “line in the sand game” in which the Hawks, after eight losses in a row to their fierce rivals, stood up to the Bombers amid ugly scenes. The tribunal dished out 16 games in suspensions and more than $70,000 in fines.

“Thirty tackles says it all, the lack of defence says it all,” Lloyd said. “They’re too nice, and there’s no ruthless streak whatsoever.

“You’ve got to start somewhere, how’s it going for them?”

Reminded that he was suspended in his last game and missed the 2009 finals for ironing out Hawthorn’s Brad Sewell in the final round, Lloyd said he was not advocating for excessive violence.

Rutten did not single out any one player out but when asked about Shiel said the high-priced recruit was among a group of senior players who had let the team down.

Youngster Jye Caldwell hurt his shoulder after colliding with Tom McCartin running with the flight of the ball in a marking contest.

Official leaders Dyson Heppell, Merrett and Andy McGrath, and key midfielders Darcy Parish and Shiel, laid just six tackles between them in the Dons’ total of 30, while Callum Mills had 13.

“When I look across our squad and team, we didn’t show the resolve, steeliness to maintain the level that we needed to,” Rutten said.

“There were times we were too easily derailed off our game, and found it hard to get back. In particular, our more senior players, they’re the ones we need to pave the way and shine the light for our younger guys. They didn’t do that tonight.”