Collingwood coach Craig McRae said his side learned a lot from Thursday night’s seven-point loss to the Brisbane Lions, but lamented the Magpies had suffered another “honourable loss”.

“We’re here to win and we didn’t get the job done, and we’ve got some work to do still.” 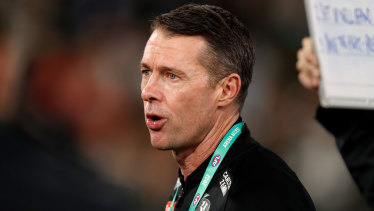 McRae also admitted the tall forward line the club selected “probably didn’t work”, despite the young Collingwood side pushing last year’s preliminary finalists in a close game at the Gabba.

Tall forwards Mason Cox, Darcy Cameron and Nathan Kreuger were all a part of Collingwood’s attacking structure, with other forward options missing due to injury and COVID-19 protocols.

McRae said the Magpies’ forward line was still “a work in progress”.

“It hasn’t looked the same for three weeks now. Beau McCreery hasn’t played the last few games – he’s a great pressure player for us – and Ginnivan’s out this week and Mihocek and Jamie [Elliott],” he said.

However, McRae flagged three changes to Collingwood’s forward line with McCreery, Mihocek and Ginnivan all said to be available for the Magpies’ round six match against Essendon on Anzac Day.

McRae also said key forward Cameron would be assessed after he suffered “a cracked rib or something like that” during Thursday night’s game.

Despite the loss, McRae said he was still pleased with Collingwood’s ability to hang in the match.

“I really liked this week how we stifled momentum, it was the first time for the year that we have done that, in the second quarter,” he said.

Meanwhile, Lions coach Chris Fagan said his side would address its ill-discipline this week after conceding three goals from 50-metre penalties, including one against defender Harris Andrews for putting his arms out, which led to umpire Andrew Stephens saying: “Arms out… it’s 50 mate”.

“I’ve felt like we’ve been really disciplined in that regard for most of this year. But tonight, there were some things that I didn’t like,” Fagan said.

He also lauded 2020 Brownlow medallist Lachie Neale as “enormous” in lifting the Lions to their fourth win of the season.

“He was the one that really got us going around clearance and contested ball,” said Fagan. “He put the team on his shoulders and carried us I reckon.”

Fagan also praised key forward Joe Daniher for his strong form in his second season at the club.

“I think he’s used to his teammates, I think he’s got his confidence back in his body,” said Fagan.

“This is not a criticism of Essendon in any way, shape or form, but if you’re a Daniher and you’re at Essendon, there is a fair bit of pressure on you. I think Joey is enjoying the change [at Brisbane].”