Newcastle are a club under pressure. After a bright start to the season, the Knights have lost seven matches in a row to sit in last place on the ladder ahead of Friday’s Magic Round clash against the Bulldogs. Newcastle Knights and Wests Group CEO Philip Gardner discusses the form slump, growing pressure on coach Adam O’Brien and the circus that surrounded Kalyn Ponga’s prolonged and public contract negotiations.

Gardner was overseas when Kalyn Ponga finally committed to the club. Ponga was already contracted to the club for two more years, but had exit clauses that could have resulted in his defection to the Dolphins. Months of public negotiations proved a distraction to all parties and questions were raised over whether Ponga’s father, Andre, held too much sway during the process. Ultimately, Ponga opted to sign a new five-year deal that voided all previous get-out clauses. Speaking for the first time about the protracted affair, Gardner denied Andre Ponga exerted undue influence.

“I can tell you that I’d much rather deal with the father of a player than an agent because the father cares,” Gardner said.

“They are making sure that the deal is in the best interests of the player and there are no other things involved in the process. And this is what happened.

“Those negotiations were very robust but they were done in the best way, with the best intentions and the right outcome was achieved. 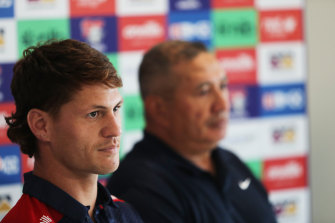 “The whole circus that goes around players now, regardless of their contract status, really challenges the mental strength of the players. We’re seeing the same thing being played out with [Cameron] Munster – he’s contracted to the Storm until ’23 but it’s consistent speculation about where he’s going to be. And he’s performing in a side that’s performing extremely well, yet he’s feeling the pressure.

“KP has done a fantastic job of dealing with the pressure of the situation. He’s shown why we made him captain.

“What you have seen here with Kalyn – and you’ve got to remember that Kalyn is 24 – he’s committed the next five years of his life to the Knights. It’s an incredibly big vote of confidence in the club and our football leadership, that a young man at the peak of his power has decided to commit himself to this club for five years.

“We’re incredibly proud of Kalyn and incredibly happy with that decision.” 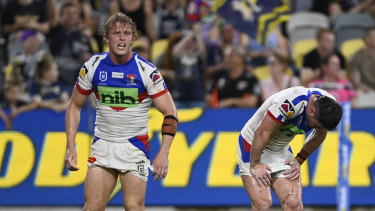 It’s been a tough start to the season for the Knights.Credit:Getty

Several other Knights have escape options in their favour that, if triggered, could see them leave at the end of the year. Tyson Frizell, Lachlan Fitzgibbon and Jack Johns are among them.

“Options are unavoidable in the modern game,” Gardner said. “You have agents involved and if you look through the players, all of the most important players traditionally have options, whether it be in their or the club’s favour.

“I saw that some contracts have options in the player’s and the club’s favour. It’s just part and parcel of negotiation of contracts and it depends on where the power sits in those negotiations.” 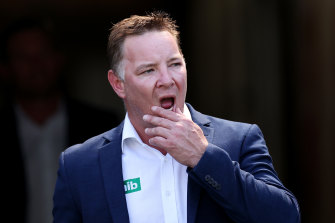 Coach under the pump

Adam O’Brien has steered Newcastle to finals appearances in his first two seasons. However, the pressure is on as they face eight consecutive losses if they can’t topple Canterbury during the opening match of Magic Round.

“There’s no doubt in our mind that Adam O’Brien is the right coach for us,” he said.

“I see his work ethic, how hard he works and his relationship with the players is very good. There are no issues with that for us. I think Adam will be our head coach for a long time.”

Previous coach Nathan Brown was under a unique performance-based deal that allowed either party to terminate the arrangement without incurring a huge payout. However, O’Brien is secured under what Gardner described as a “very straight contract”, one he hopes will be extended in due course.

“We hope that Adam is with us for the next 10 years,” Gardner said. “I think we have the right group of people. Our club is a team and the good clubs have great teamwork.

“We’ve got Adam O’Brien, Danny Buderus, Andrew Johns, Hayden Knowles, and Clint Zammit is heading up our recruitment. I look across the game and there’s no other group I’d swap it for – and that includes Melbourne.”

The Knights were criticised for granting captain and halfback Mitchell Pearce a release in the off-season, the timing making it impossible for a suitable replacement to be found. That setback was exacerbated by their failed bid to poach Luke Brooks from Wests Tigers.

“It’s a challenge every club faces,” Gardner said of Pearce’s departure. “Older players, as they age, it’s impossible to tell when their legs are going to go, their physical position or where they will be mentally.

“Everyone is going to face those sorts of challenges.

“The issue for us is not just the issue with Mitchell. Jayden Brailey did his Achilles before the season started. Andrew Johns came up to assist us in a consultancy role to work with our halves and in that situation we were relying very heavily on Jayden Brailey about how we would play our game, given the situation with Mitch. 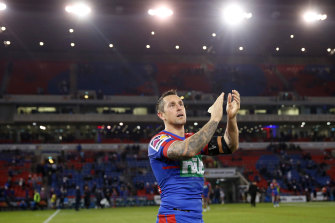 “Andrew did a great job but before a ball was kicked we lost a key element in our dummy half. Not only did we lose our seven but we lost our nine. I don’t think any other club has had to deal with that before the season started.”

Perhaps no other club has had a worse run with injuries. Ponga, Brailey, Frizell, Daniel Saifiti, David Klemmer, Dane Gagai, Fitzgibbon, Jake Clifford, Dominic Young and Edrick Lee have spent time in the rehab ward, while Mitch Barnett was sidelined for six weeks due to a suspension.

“We did know, and we flagged it early on when we let Mitchell Pearce go, that this season would be subject to injury, that depth would be a problem,” Gardner said. “Unfortunately that has come to pass. We’ll get the troops back in a few weeks and you’ll see a different Knights.” 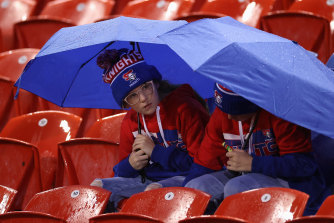 Knights fans again show why they’re the most loyal in the NRL.Credit:Getty

Newcastle fans are perhaps the most passionate in the league. They will come out and support their team even if it is losing, on the proviso it has a dig every week. However, sections of their supporter base have booed them this year following substandard efforts.

“What you’re seeing is the impact of social media right across the board,” said Gardner, who is hopeful fans will have more to cheer about during the remaining rounds.

“Social media has certainly changed the way in which crowds act and what actually happens is it feeds on itself.

“It’s not something we can fix, but it certainly has an impact across the game with fans.”

Stream the NRL Premiership 2022 live and free on 9Now.
News, results and expert analysis from the weekend of sport sent every Monday. Sign up for our Sport newsletter.