Japanese rugby has landed another bombshell on Australian rugby, with star Wallabies halfback Nic White weighing up a seven-figure offer to leave the Brumbies next year and potentially miss the 2023 World Cup.

Just two weeks after it emerged Tom Banks had been offered a staggering $1.4 million a season in Japan’s League One – which he has accepted – his teammate White is also wrestling with a similar dilemma. 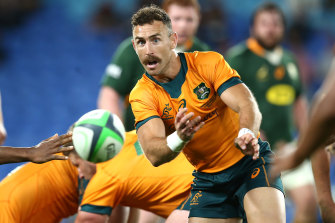 Nic White is weighing up a massive offer from Japan.Credit:Getty

Sources familiar with negotiations told the Herald the 31-year-old halfback was on track to stay in Australian rugby but had been presented with a huge offer that has changed the picture.

The loss of White would be a hammer blow for the Brumbies, in particular, with Banks going and young no.10 Noah Lolesio also potentially departing, also due to an enticing offer from Japan.

Sources said Rugby Australia is treating White and Lolesio as “priorities” and are working frantically to convince them to stay.

White has become a stalwart of the Wallabies since being lured back from England by coach Michael Cheika before the 2019 World Cup, and is currently in the national team’s leadership group, along with Allan Allaalatoa, James Slipper and James O’Connor. 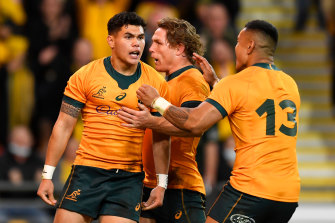 Noah Lolesio after scoring against France in 2021.Credit:Getty

Although the Wallabies have some decent alternative options at halfback in Tate McDermott and Jake Gordon, White’s kicking game, game management and tenacity are loved by coach Dave Rennie.

The pugnacious No.9 will start against England in July, but whether Rennie would call on White as one of three Giteau Law picks for the 2023 World Cup would be up for heated debate.

Lolesio has been earmarked as a future Wallabies star for several years, and made his Test debut in 2020. He had a rough time and fell back in the pecking order, but with Quade Cooper and James O’Connor both nearing the end of their careers, 11-Test Lolesio is seen by many as the future No.10 for the Wallabies.

Brumbies coach Dan McKellar said on Wednesday that Australian rugby needs to find ways to get more money into the RA bank account, to be able to compete with cashed-up foreign rivals.

The Wallabies contracting budget has fallen by a quarter since 2019.

“It is an individual choice isn’t it, that’s life, you are always going to be faced with choices whether it is football or other areas of your life,” McKellar said.

“It is challenging obviously, the overseas clubs are in a position where they can offer significantly better money.

“The challenge moving forward is how can we get money back into the game to compete with those?

“It is not ideal, losing a core group of players if they decided to go,” Mogg said.

“Ideally everyone wants to stay together and everyone enjoys playing together. But just the way it is rugby, you accept what happens and move forward. There will be always someone raring to go and to step up.

“French rugby was like [Japan] a couple of years ago, there were big contracts being thrown around. It has levelled out a bit now. But there is always that hype around World Cup years, and that’s the big issue at the moment. Do you stay or do you set yourself up?

“Everyone has their choice but at the end of the day we have to accept that’s the way rugby is. It is a global game, which is an asset for rugby.”