A year after he switched to rugby from the Melbourne Storm amid fanfare and dollar signs, Suliasi Vunivalu found himself in a “dark place” at the end of 2021, wondering if he had made the right decision.

But having recovered from the back-to-back hamstring injuries that wrecked his first year, Vunivalu now stands on the verge of a Wallabies debut, after being named on the bench for the third and deciding Test against England on Saturday.

Vunivalu was one of several changes made by Dave Rennie to the Wallabies team for the SCG clash, with fullback Reece Hodge and flanker Harry Wilson both named for their first games of the series, and lock Nick Frost and prop James Slipper promoted from the bench into the starting side.

How much game time Vunivalu gets as a second-half impact weapon remains to be seen, but a debut in Wallaby gold will be the realisation of a goal the former NRL flyer set three years ago when he signed for a 2021 code switch. The 26-year-old admitted, however, suffering two bad hamstring injuries in his first season for the Reds – which both required surgery – saw him sink into some tough times.

“I was actually in like a really dark place,” Vunivalu said.

“That thought came in my mind. Did I really do a right decision to come over? I just had to look at it in a positive way. It’s just a small setback. I need to stay positive. 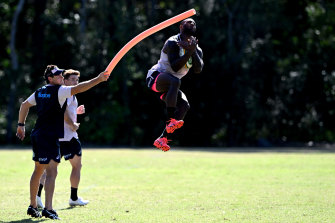 Suliasi Vunivalu leaping high for a catch at Wallabies training.Credit:Getty

“To look back with all the setbacks, the training and watching the boys last year, getting picked for the spring tour I was doing my rehab in Melbourne … just itching to be there one day. Now the day has come and I’m just really excited.”

Wallabies coach Dave Rennie has been an unashamed fan of Vunivalu and said they had aimed to accelerate Vunivalu’s development in rugby in the last month, and set him the task of getting busier around the field, like his 2016 Storm grand final teammate Marika Koroibete. 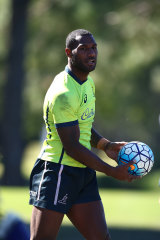 Suli Vunivalu showing his skills in a third football code at Wallabies training.Credit:Getty

“He’s a helluva athlete, and so we’re excited for him to get an opportunity on the weekend; we can see him getting some reasonable minutes and hopefully stamping his authority on rugby at this level,” Rennie said.

Vunivalu recently rejected offers to go back to the NRL and re-signed with Rugby Australia and Queensland for 2023 and a shot at the Rugby World Cup. But after watching State of Origin on Wednesday night, he said the Wallabies should be seeking to emulate the ferocity seen in the opening exchanges.

“After watching that game it just made me look forward for the Saturday game with that intensity right from the start,” he said.

“We’ve been lacking that with the Wallabies in the first 20 so if we can bring that up and shut the Pommies out then we’ll do a good job.”

The loss of more injured troops, and the return of others, prompted a decent reshuffle from Rennie.

Hodge, who wasn’t picked in the original Wallabies squad, has been called in as “Mr Fix-it” and will even cover five-eighth, with Rennie electing to not select a specialist in James O’Connor on the bench. 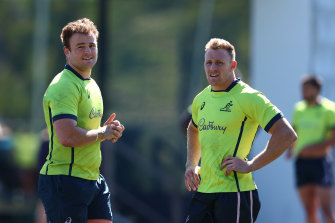 Harry Wilson and Reece Hodge at training after recalls to the Wallabies side.Credit:Getty

“He’s come straight in and slotted in really well, he’s got a big kicking game and we think that will be advantageous as well,” Rennie said.

“And he’ll also fill holes during the game, he’s one guy that we know based on injuries or needs he can slot in somewhere even if he hasn’t trained there during all week.”

The loss of Cadeyrn Neville prompted a reordering of the middle-row, with Frost earning a start in only his second Test, and Rob Leota pushed back to the bench as lock cover. Rennie said he wanted to keep one lock up his sleeve.

Wilson, who was left off the spring tour last year and didn’t make the bench this series due to a lack of versatility, will get his first Test cap in almost a year, since the Wallabies’ 57-22 loss to New Zealand in Auckland in August.

The early physicality of ultra-reliable prop James Slipper saw him promoted, from reserve tight-head prop to starting loose-head, and Angus Bell benched for a finisher’s role. Despite having the option to start Allan Ala’alatoa, who is back from a concussion stand-down, Rennie opted to keep Taniela Tupou in the starting side.

Dave Rennie also recalled Tate McDermott for the reserve halfback role, and put Len Ikitau on the bench behind Hunter Paisami, who kept his spot in the run-on team after an impressive performance in Brisbane.

Wallabies team to play England at the Sydney Cricket Ground