Almost from the moment he announced in the pages of the Herald back in April that he would love to coach the Wallabies one day, things have gone belly-up for Queensland coach Brad Thorn.

Even that story itself cast a pall over Thorn’s nascent candidacy when a Rugby Australia spokesman announced that the Reds boss had some serious making-up to do. “Thorn has not been good to work with….a decision doesn’t have to be made now, but he had better turn that around – and quickly.”

Thorn was reportedly shattered by those comments. After an inexcusable delay of 24 hours, the Queensland Rugby Union finally took offence and released a statement demanding to know in what way Thorn had been so difficult to work with. There was some awkward humming and hawing from RA at this point before it was suggested that perhaps he wasn’t the most approachable of fellows.

Well, welcome to our world, RA. Thorn has always modelled himself on his old mentor, Wayne Bennett, and is as gruff and taciturn as it gets. Like Bennett, he tolerates the media when he must but, otherwise, he volunteers nothing. And that is pretty much his approach to all outsiders.

He lives for his team. But lately that, too, has been causing him grief. Like every Super Rugby franchise at this time of year, the Reds are farewelling a small group of players but this time, it seems, the goodbyes have been laced with acrimony. Not from everyone, surely, but certainly a couple of players have taken a parting swipe at Thorn.

It’s hardly unusual for players to criticise the coach when they have been dropped from the side or cut from an RA contract and that certainly shades the situation here. But when the names of Lukhan Salakaia-Loto, Alex Mafi and Angus Scott-Young are piled on top of other players who have left the franchise, it seems – and I stress, seems – that it’s not entirely a happy dressing room. Quade Cooper, James Slipper, Karmichael Hunt, Izack Rodda, Harry Hockings, Isaac Lucas … all gone. You could build the nucleus of a reasonable Wallabies side from that list. 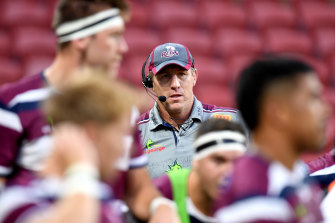 Queensland Reds coach Brad Thorn has endured a tough campaign since his side snapped the Brumbies’ unbeaten start to the Super Rugby season.Credit:Getty Images

Probably only Cooper’s departure could be laid at Thorn’s feet – and even then, the mercurial five-eighth was cut only with the full approval of the QRU board – but it is understood he is most hurt by accusations that he forced out Rodda, Hockings and Lucas. All three wanted to remain, but they also wanted to be fully paid to do so. RA had introduced some radical cost-cutting measures to save the game and they were the only players, Australia-wide, who refused. They left. Blaming Thorn might fit the narrative but it’s nowhere near fair.

There are now whispers that Taniela Tupou may be heading to Melbourne and that another significant Wallabies star is also looking for a way out. Both are signed through to the end of 2023 and won’t be going anywhere until then.

Such rumours always abound in the year leading up to a World Cup and Queensland are confident of retaining both players, but it only takes a threat that a player as important as Tupou is looking elsewhere for the walls to start closing in.

It hasn’t helped the Reds have produced only one outstanding performance this season, beating the Brumbies 21-7 in Brisbane. Since then, they lost six matches out of eight. All five Kiwi sides beat them. They were, in fact, the only Australian franchise not to register a single trans-Tasman win. Injuries to key players no doubt cost them dearly but even the Reds acknowledge they should have done better. 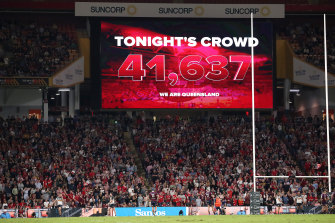 The Reds still finished with a winning season, their eight victories matching the Waratahs and Hurricanes, but they were in the bottom half of the table. Their final home game, against Moana Pasifika, drew a worrying 9000-odd spectators. Last year they had nearly 42,000 rabid Queenslanders supporting them when they beat the Brumbies in the Super Rugby AU final.

While the Dan McKellar-coached Brumbies sparkled this season and the Waratahs enjoyed a remarkable turnaround, the Reds coughed and spluttered. Arguably, Thorn has now fallen to third in line as a prospective Wallabies coach behind McKellar and the Tahs’ impressive Darren Coleman.

That can all change in a single season, of course, and indications are that the Reds are looking to find an extra coach to assist Thorn and colleagues Jim McKay, Michael Todd and part-time scrum guru Cameron Lillicrap.

But Queensland are now starting from the middle of the pack, while Thorn’s critics ponder whether, after five seasons at the helm, he has taken the Reds as far as he can. I’m not sure that’s true but it’s a valid question.

Meanwhile, the Reds could miss out entirely on having any players in the Wallabies XV for the first Test against England. Every Test that goes by with the Queenslanders reduced to mere spectators widens the gap. Thorn’s task is not getting any easier.

Watch every match of the July Test Series on the Home of Rugby, Stan Sport. Kicks off Saturday, July 2 with Wallabies v England, New Zealand v Ireland, South Africa v Wales and Argentina v Scotland. All streaming ad-free, live and on demand only on Stan Sport.