Former St Kilda coach Grant Thomas will meet with Saints president Andrew Bassat this week as his bid to bring change to the Saints’ board and end a 55-year premiership drought intensifies.

Thomas and heavyweight businessman Gerry Ryan are endorsing dental surgeon and influential Saints figure Larry Benge for a seat on the board. They believe Benge would help to bring fresh ideas to the club, which has made the finals only once in a decade. 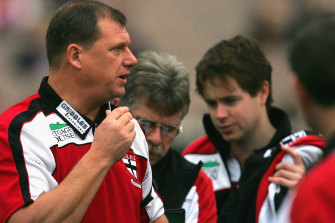 Thomas has already met with Bassat and sources close to him say the discussions were encouraging. This next meeting could be as early as Monday. Thomas and the Saints did not wish to comment when contacted, but industry sources claim Thomas could also be open to joining the board, should the chance arise.

However, he has made his feelings clear on social media in terms of where he thinks the club, under Seek co-founder Bassat and long-time chief executive Matt Finnis, is heading after another disappointing season when a decision to recruit established talent failed to result in back-to-back finals campaigns.

“We are supporting a talented person in Larry Benge who can help the club to change its current course which – to be frank – is not going to deliver a premiership. I’m sure the club will embrace him but if it doesn’t, I’ll consider my options,” Thomas said.

“We desperately want a premiership, which I’m certain the incumbents do also. That takes leadership, daring and innovation. I’m not certain we understand that or apply those principles. The current formula and/or leadership is not working.”

Thomas led St Kilda from 2001 to 2006, harnessing an emerging group, before he was unceremoniously sacked by then president Rod Butterss. He was unable to drag the Saints to their second flag, something his successors have also failed to do, although Ross Lyon reached grand finals in 2010 and 2011.

Having finally returned to the post-season last year, the Saints under Brett Ratten had been tipped to challenge for the top four this year but injuries and poor form hurt. The pressure was at its fiercest in May when an 111-point loss to the Western Bulldogs prompted club great Nick Riewoldt to question whether the Saints’ big-money recruits were suffering from “full bellies”.

Bassat then released a statement, declaring the club believed its premiership window was unlikely to fully open until next year

Ratten is off contract next season, and has admitted the spectre of four-time premiership coach Alastair Clarkson, who is enjoying a year off, will loom over the competition.

Thomas has also used social media to claim “‘Ratts’ is a strategic & tactical genius I hear, but I’m not certain attitude and effort are as stringently managed”.

Responding to supporters’ suggestions that injuries hindered a team that finished 10th with 10 wins, Thomas replied: “You blame injuries. I blame attitude. Injuries don’t mean you can reduce effort.”

The Saints are not the only club dealing with boardroom issues. Collingwood have been under fire all year, with prominent businessman Jeff Browne orchestrating change, while Hawthorn’s 1991 premiership player Andy Gowers and former Australian Super boss Ian Silk have Jeff Kennett in their sights at Hawthorn. Carlton’s board is facing another challenge from investment fund manager John Hollingworth.