Hollywood star Hugh Jackman has thrown his heavyweight support behind the NRL’s bid to open the 2023 season with a premiership game in the United States, declaring: “They would love the great game of rugby league here.”

As first revealed by The Sun-Herald in October, Manly and South Sydney are keen to participate in what would be the first competition game staged outside Australia or New Zealand. The concept, dubbed “Round Zero”, has been in the offing for several years but was shelved due to COVID-19.

However, with international travel resuming, the parties are keen to revive the American dream in a bid to crack the world’s biggest sporting market. The clubs are in a unique promotional position given Sea Eagles fan Jackman and Rabbitohs counterpart Russell Crowe are keen to help hype the event.

To that end, the Wolverine star expressed his support for the project between performances of the Broadway hit The Music Man in New York during the week.

“Bring it on!” Jackman told The Sun-Herald. “Would love for it to happen. They would love the great game of rugby league here in the US I’m sure.”

Jackman’s work commitments may prevent him from attending the game itself, but his endorsement will help raise awareness of the sport as it attempts to make inroads into the United States. 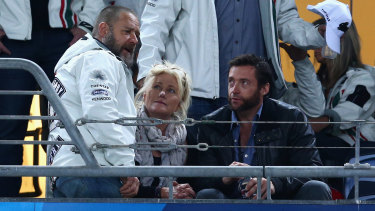 “We know that people who watch and follow rugby league love it, and we want even more people to get access to it,” NRL chief executive Andrew Abdo said.

“When we can use some of our well-known celebrities that follow the game to bring more people into the game, it’s always a good thing.

“It’s a wonderful opportunity, but we need to work out how to make it work and make sure it’s something we get a long-term benefit from.

“There’s a lot of work to be done, but we’re onto it because we see it as an exciting opportunity to grow the game. Between now and the draw coming out, we will be putting a lot of resources into what can be achieved.”

The game, which would be played a week before the rest of the competition starts to allow for travel and recovery time, would likely be staged at the 22,000-seat Banc of California Stadium. The time difference would allow for a Saturday night fixture to be beamed back to Australia on Sunday afternoon.

The legalisation of sports gambling in several American states will help provide the funding to underwrite the venture and potentially provide a new long-term revenue stream for the code.

“Would love for it to happen.”

“This is about the growth of the game from a fan perspective,” Abdo said. “We know it’s a wonderful sport, so the real question for us is how we get more people interested in following it and playing it.

“This will be linked to that strategy. There’s a lot of work to do and we’re working on a number of different elements to this. 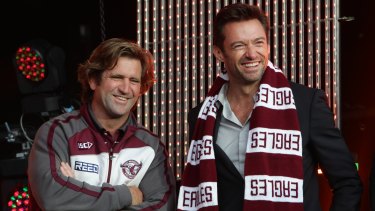 Rugby league has had a chequered history in America. The last foray was the ill-fated Denver Test match between New Zealand and England, in which the promoter suffered a financial loss, resulting in the players initially being out of pocket.

In 1987, a State of Origin match was played before a crowd of 12,349 at Veterans Memorial Stadium in Long Beach, California. One of the people tasked with promoting that game, former league player and administrator Bernie Gurr, said the latest venture presented a unique opportunity.

“It’s exciting they’re talking about bringing a game here, California is the right place,” Gurr said from California. “It’s a good idea, but it’s only as good as the promotion around it, and it can’t be a one-off, it needs to be part of a broader strategy.

“If they are planning to link that to the gambling tie, then that’s an interesting strategy because there are all of these established sports that will be trying to take advantage of the loosening up of legal gambling avenues.”