Manchester: The Australians have identified New Zealand’s Nelson Asofa-Solomona and Brandon Smith as the two players they can expose in this weekend’s Rugby League World Cup semi-final in Leeds.

The Australians held a training session in Manchester on Wednesday (AEDT) where several players were asked to impersonate the Kiwi duo as the Kangaroos fine-tuned their game ahead of the do-or-die showdown at Elland Road. 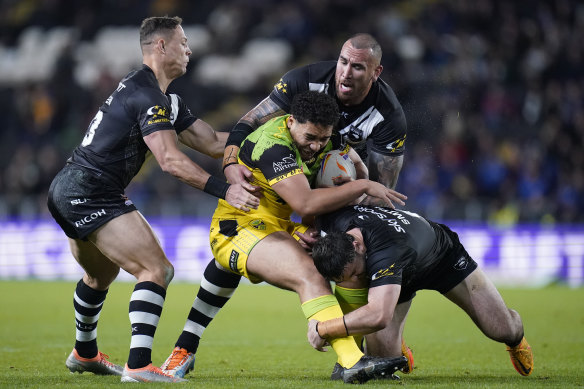 Nelson Asofa-Solomona and Brandon Smith are expected to receive plenty of attention in the World Cup semi final against Australia.Credit:Getty

Lindsay Collins was asked to perform the role of man mountain Asofa-Solomona, while Harry Grant and Ben Hunt swapped bibs as they did their best Smith impersonations.

The players were asked to wear fluorescent bibs as the Australian attack worked its way around the paddock trying to exploit the pair defensively.

Hunt is expected to get the nod as the starting hooker for the clash against the Kiwis, with Grant set to be used off the bench as Queensland did with great impact during this year’s Origin series.

It means veteran Daly Cherry-Evans is expected to be left out of the side, while prop Reagan Campbell-Gillard will return from injury.

“I hate sitting on the bench. I would much rather be out there.”

“Mal [Meninga, Australia coach] has indicated to myself that he does enjoy us playing together, keeping us fresher and bringing a lot of energy,” Hunt said.

“I feel like we have both done enough to be in the side. I prefer to start. It is probably a bit harder and the sting is not out of the game, but I hate sitting on the bench. I would much rather be out there. I definitely think it [coming off the bench] suits Harry a lot better.

“I can go out there and take the sting out of the game a bit, defend really well and do a few little things. Harry can come on when there is a bit more pace around the ruck and do his thing. I think that is what he is really good at, getting out of dummy half and playing quick.”

While Australia have identified Asofa-Solomona as a target defensively, they know how dangerous he can be in attack.

“As a small player I always get asked who is the hardest guy to defend, and he is definitely in my top three,” Hunt said.

“I am pretty lucky in this team that I have some good defenders around me. I think he is playing on their right edge, so I might find myself away from him.”

“It is going to be pretty physical. I am thinking of it as like an Origin game. It is going to be very physical and we have to dominate their forward pack. They are obviously really big and if we want to win, I think that is where it is won. I think it is going to be a really simple game from both teams.”

Meanwhile, the Samoans have been given a huge boost ahead of their semi-final against England in London on Sunday morning (AEDT).

Captain Junior Paulo has escaped a one-game ban for dangerous contact on Tonga’s David Fifita in the quarter-final. He and Joseph Suaalii were placed on report during the game. Paulo had to plead his case with the World Cup judiciary and managed to get off.