Can anyone truly understand the lot of Luke Brooks?

Where the only thing bigger than the pay cheque is the expectation that comes with it, from a Wests Tigers fan base desperate for the success that has for so long eluded it.

If such a person exists, then it is Moses Mbye.

Mbye was that guy; the marquee playmaker tasked with delivering the joint-venture outfit to the promised land. For three seasons, Mbye dealt with Brooks-esque scrutiny before the parties decided a change would be best for all.

Now at St George Illawarra, Mbye will come up against his former club for the first time. Perhaps more than anyone, he knows the roller coaster that has been Brooks’ time in the spotlight at Concord.

“I love Brooksey,” Mbye said. “I got close to Brooksey when I was at the Tigers and our wives are close. It was painful for everyone to go through what he was going through, even though he’s got such a strong mind. It wouldn’t be bothering him as much as everyone thinks.

“He’s such a tough character and wants to succeed. He wears his heart on his sleeve. He’s a Tigers man through and through, that’s for sure. 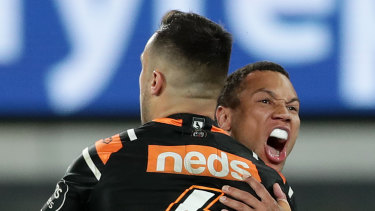 Moses Mbye and Luke Brooks know the pressure of being “The Man” at the Tigers.Credit:Getty

“He’s a local junior and he loves the club, he shows a lot of pride about how he goes about his business.

“It was so good to watch him kick that field goal on the weekend. I’ve been beside him when he’s done that. That’s what he does, he’s that player who can ice games.

“When you’re not getting results, your key men, your highest-paid men are the ones under pressure.

“It’s good to see him back smiling and playing quality footy. I just hope he doesn’t play too well this weekend.” 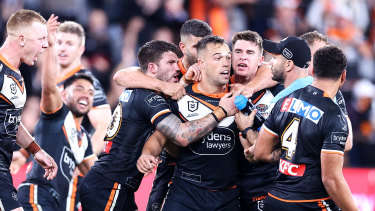 Luke Brooks is mobbed by teammates after kicking the winning field goal against the Rabbitohs last weekend.Credit:Getty

Mbye and Brooks, after going through a difficult start to the season with their respective sides, have played some of their best football in the past fortnight. Brooks has benefited from playing alongside Jackson Hastings in the halves, while Mbye has been solid in the No.1 jersey.

Both have been lighting rods for criticism throughout their careers, particularly when expected to be the main man at the Tigers. Asked why he thought Brooks copped so much flak, Mbye said: “It’s probably a number of things – the price tag always contributes to that – I’ve been on the end of that as well. And you’re an easy target at the Tigers because they haven’t been going too well.

“I was there for three odd years and we weren’t going well. I think we finished ninth, 12th and bumbled around and had a good playing group, but just weren’t getting results. That brings a lot of pressure on you.

“It’s a passionate support base; they are a well-supported club. The people behind those walls put in a lot of hard work to get good results and, unfortunately, it wasn’t happening. But over the last couple of weeks, they’ve tweaked a couple of things and moved personnel into key spots and that has paid dividends.”

The winner of Sunday’s clash at WIN Stadium will be on a three-game winning streak that will take further pressure off the victorious coach. While he didn’t have the success he had hoped for at the Tigers, Mbye spoke glowingly about his time at the club.

“For me, the Tigers were such a big part of my career,” he said.

“I got to do things that I probably won’t get to do again: I got to captain my club, I got to play State or Origin. The Tigers were really good for me and to my family. My son was pretty much born when I was in the Tigers, he wore a Tigers jersey religiously.

“It’s a great club, I wouldn’t say a bad word about the Tigers … There’s a lot of good-quality people there who want the best for the players. They will keep their heads down and get good results.”