Western Bulldogs coach Luke Beveridge says inaccurate goalkicking has been addressed within the team and he expects last year’s grand finalists will begin to turn the tide after a slow start this season.

The Bulldogs will enter the Good Friday match against North Melbourne as the second-worst side in the competition for goal accuracy, only converting 40 per cent of shots at goal this season. 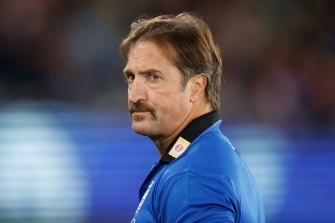 Bulldogs coach Luke Beveridge says goalkicking has been worked on this week.Credit:Getty Images

Beveridge said the Bulldogs’ 38-point loss against Richmond last weekend was “the height of our lack of efficiency” during his time at the club, with the team kicking 19 behinds and only seven goals.

The premiership-winning coach said the issue had been “verbally” addressed, with some set-shot practice taking place during training on Wednesday.

“On a shorter week, you can’t spend a lot of time on repetition. A lot of it’s about recovery and preparing for the next challenge,” he said.

“But we did enough yesterday to get ourselves in the right frame of mind.”

Beveridge was still upbeat about the Bulldogs’ start to the season, despite the club recording only one win after four rounds after inaccurate displays in front of goal.

“The positives with it all are the opportunities we are creating,” said Beveridge. “We feel like we haven’t drawn the benefits from the way we have defended as a team.”

However, he also said five rushed behinds against Richmond inflated the scale of the team’s inaccuracy, with inside-50 entries also to blame.

“We don’t feel like we are doing that well enough. For all the inside-50s we’re getting we can turn them into better quality entries,” he said.

“I think one of the things you try not to do is turn it into a gorilla because you’re talking about it too much and spending too much time on it. So, we’ve got faith we’ll come out of it.”

Beveridge confirmed key defender Zaine Cordy would return to the side against the Kangaroos on Friday after missing last Saturday’s game against Richmond due to a concussion sustained in round three.

Small forward Laith Vandermeer will also come out of the team that faced Richmond in round four due to a hamstring injury.

Mitch Wallis could return to the starting side after spending the last two matches as medical substitute. Beveridge said his experience made him ideal for the role compared to younger players.

“I know that it’s happened at other AFL clubs, but there are one or two of our new bloods … that we’d like to give a game to at AFL level when they are ready and that’s unlikely to be as a sub. We’ve never done that,” Beveridge said.

The Bulldogs will face a North Melbourne side that put up a strong showing in an 11-point loss to Sydney last week.

The match will raise funds for the Royal Children’s Hospital and the Good Friday Appeal.

“As the Kangaroos and our club has said over the journey, we love the fact we are a part of it and we want to be a part of it for a long time,” said Beveridge.