A defiant Brad Arthur says he is not panicking about Reed Mahoney heading a flurry of high-profile players defecting to rival clubs, insisting the Eels were faced with the “impossible” task of keeping their entire NRL squad.

Just days after gun hooker Mahoney accepted a four-year deal to join the Bulldogs from 2023, a candid Parramatta coach has reassured Eels fans the club will develop another batch of young stars to remain a premiership force.

The Mahoney blow comes hot on the heels of back-rowers Isaiah Papali’i (Tigers) and Marata Niukore (Warriors) confirming they will leave the Eels at the end of 2022. The trio have insisted they will see out the remaining year of their contracts.

In a wide-ranging interview with The Sun-Herald, Arthur defended the club’s attempt to manage its salary cap in the face of poaching raids, while opening up on Mahoney’s call to tell him he had accepted an offer from the Bulldogs, having been wooed by Phil Gould.

“Am I disappointed these boys have to leave? Definitely. I appreciate and understand it’s a brave decision from them – none of them have enjoyed coming in and telling me they’re leaving the club. Everyone has got a different situation or need from the game, and I can’t be the one that makes judgment on it. 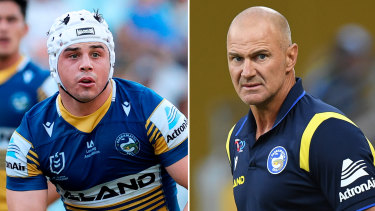 Reed Mahoney and several other Eels players have signed with rival clubs in recent weeks, but Brad Arthur is calm.Credit:Getty, NRL Photos

“We’ve tried to do the best we can in terms of managing our cap. This is more about management of the cap than what we think they’re worth. But I’m not panicking about it, I’m more than comfortable and I don’t take it personally. We will get more players, and we will develop more players.

“The club is in a better place than it has ever been. It will be bigger than any of us.”

Mahoney’s signature has been one of the most coveted in the NRL’s silly season, which has also seen Penrith’s Viliame Kikau (Bulldogs) and the Tigers’ Luciano Leilua (Cowboys) announce new homes for 2023.

“I’m not panicking about it. We will get more players, and we will develop more players.”

It has left Eels fans exasperated one of the best No.9s in the game, touted as a State of Origin selection by none other than Cameron Smith, will return to a club that let him go as a junior.

The Bulldogs tabled a mammoth offer worth more than $600,000 a season over four years for Mahoney, while the Eels only proposed a three-year extension.

The Mahoney news took the shine off the retention of captain Clint Gutherson and Reagan Campbell-Gillard, while the Eels have switched their focus to ensuring NSW prop Junior Paulo re-signs with the club. Wayne Bennett’s Dolphins have registered an interest in the 28-year-old, who is managed by the same interests as Gutherson and Mahoney.

On November 1, the Eels had 18 players off contract or with an option in their deal for 2023, leading to a roster scramble once other NRL clubs could formally table offers to their stars.

Asked about the impact of Mahoney’s decision to leave for the Bulldogs, Arthur said: “Four or five years ago I would have taken it personally. But I get where it’s at now. 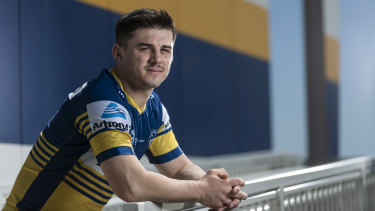 Reed Mahoney will join the Bulldogs in 2023.Credit:Brook Mitchell

“Reed started on a six-week deal, then a six-month deal and then a development deal. To his credit, he kept fighting for it. His training kept getting him his opportunities.

“Sometimes as a club it’s on the other foot where we’ve got to say, ‘It’s not working for you, or we don’t have room’. It’s a two-way street and it was hard for these boys to come and sit here and eyeball me to say they’re taking up another opportunity. I respect them for that.

“But we’re obviously doing something right. We’re a development club and every player that’s coming to our club at the moment, we’re making better players and better people. That’s the coach’s job to do that.

“I’m more than confident in the structure of the club and the coaching staff I’ve got, with Paul McGregor and Mick Ennis to help with that process.”

Having pushed eventual premiers Penrith all the way in a gripping week two finals clash, Arthur said his players now know they are capable of snapping a title drought spanning 35 years before Mahoney, Papali’i and Niukore head elsewhere.

“We always thought we were good enough and getting closer, but at the back end of the year after a tough four weeks we proved to ourselves – not anyone else – that we can,” Arthur said. “We always thought we could and believed we could, but there’s a difference between thinking and knowing it. We now know we’re not far off.

“And these three players are committed to doing the most they can for their teammates, the club and the fans for next year, and it won’t affect anything they do. The club will be there forever. There will be another coach that will come in after me and there will be more administrators.”