Ivan Cleary is confident Taylan May can thrive in his first finals game, backing the controversial decision to allow the Penrith winger to play with a two-game ban for an assault hanging over his head.

A decision to defer May’s two-match ban for his role in an assault while defending teammate Nathan Cleary until next year remains a point of contention ahead of Penrith’s finals series opener against Parramatta on Friday night.

ARLC chairman Peter V’landys said the game should not be robbed of its best players on the biggest stage, a stance that has split rugby league fans and pundits alike.

May had no criminal conviction recorded after being captured on CCTV dragging an 18-year-old patron to the ground during Penrith’s premiership celebrations last year. He was found guilty and his actions labelled “cowardly” by a magistrate, but was fined only $1000.

Panthers coach Cleary says he is “very pleased” May will be able to play, adamant the 21-year-old winger’s presence will not be a point of frustration for opposition coach Brad Arthur.

“Some people think he shouldn’t be suspended at all as well. The NRL has made a decision, we’ll just get on with it,” Cleary said. 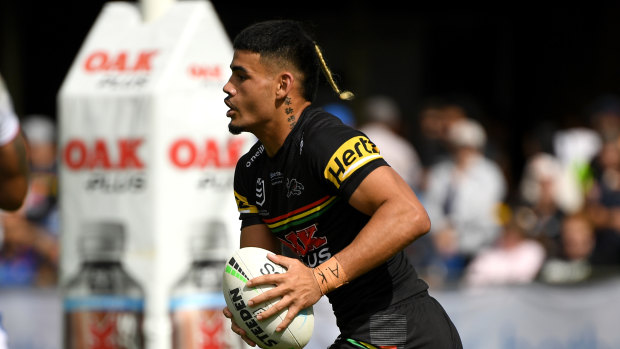 Taylan May is free to play in the finals series despite being handed an NRL suspension.Credit:NRL Photos

“I’m not going to make a call on that other than to say I support Taylan. This incident happened when he had played one game of first grade. It was 12 months ago, he was sober, he was just trying to defuse a situation. Obviously it was a little potentially strong-handed but he wasn’t trying to do anything other than to defuse the situation. It’s been dealt with in court.

“He’s prepared really well this week, he’s had a few setbacks this year in his first full year of first grade but he has done amazingly well. Probably one of the reasons he has done so well is he can compartmentalise, get his head in the game, and that’s what he has been doing this week.

“I’m sure Brad is not worrying about it. He’s got his own team to prepare. We’re exactly the same. you can’t control who is playing and who is not.”

Cleary is confident the Panthers will be able to find their rhythm early against a Parramatta outfit vowing to get the jump on the minor premiers at a sold-out BlueBet Stadium.

Nathan Cleary returns from a five-match suspension at halfback while Jarome Luai is back at five-eighth, with the pair boasting just one game between them in the past six weeks.

Penrith co-captain Isaah Yeo has declared star halfback Cleary won’t be underdone in his return and suggests he could return even stronger after time off the park allowed him to look at the game from a different angle.

The Panthers will need the 24-year-old humming against a Parramatta side which has troubled them this year, accounting for two of their four defeats this season.

“He’s definitely ready to go, it’s been a long wait for him,” coach Cleary said of his son.

“There’s probably been two phases [of his preparation]. In the first phase he was training against us, he was being the opposition playmaker and trying to put our defence under pressure. In the last couple of weeks we have been back together as a team. He’s done plenty of work, that’s for sure. He’s had his eye on this game for a long time. I’m sure he’s looking forward to it.

“[Cleary and Luai] have had two full weeks training together. We had this discussion a while back and neither of them were worried about it. I’m not worried about cohesion.”

Stream the NRL finals series live and free on 9Now.