The Swans have flunked their first major test of the year after the Brisbane Lions fended off a Lance Franklin-inspired comeback to snap their 13-year SCG hoodoo in impressive style, winning by 24 points.

In the clear game of the round – if not one of the best of the season – the Lions were in cruise control after a dominant second quarter set up a seemingly decisive 33-point lead at half-time and asked searching questions of Sydney’s ability to truly compete with the AFL’s top bracket. 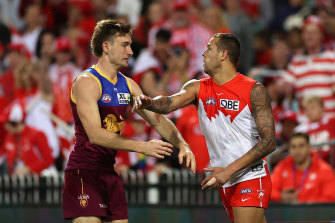 Franklin turned back the clock to help provide at least some answers. He almost single-handedly swung the match in the third term, much to the delight of the 30,110-strong crowd at Moore Park on Sunday evening, with four of his six goals straight coming in an unmissable 12-minute burst that sparked the Swans back to life, dragging them to within three points.

It was classic Buddy, who even at 35 can bend a game to his will like no other. The highlight was a left-foot dribble from an angle so acute it would have been just about impossible for any other player, but for him it has always been routine. It hit the umpire’s leg on its way in but was thankfully waved through upon score review.

But that was as close as the Swans got. Even without Joe Daniher, who was subbed off as a ‘precaution’ with a shoulder injury, Brisbane were equal to the task and fired back with the next four goals to stop Sydney’s comeback dead in its tracks. From there, it was always going to be a tough ask, and the Lions were able to close it out comfortably.

Unlike last week, when the Swans relied on some late heroics to get over Hawthorn, this time they were made to pay for their earlier failures, falling 17.11 (113) to 13.11 (89) to just their second defeat from seven rounds.

Not since the final round of 2009, back when Jonathan Brown was in his pomp, had the Lions tasted victory in Sydney.

This was a highly anticipated contest between two top-four sides and realistic premiership aspirants. The pressure was high throughout, and it proved what some Swans fans have been quietly contemplating in the back of their heads: they’re good, but not quite as good just yet as teams like Brisbane, who were bigger, stronger and meaner when it mattered.

In a clash that was pretty much decided in midfield, Lachie Neale was a cut above the rest, grabbing 11 clearances to go with a game-high 37 possessions and nine tackles.

When the Lions turned the screws with their five-goal second term, it was Dayne Zorko (22 disposals) getting it started with two goals within the opening five minutes – both from long-distance, the first almost straight out of the middle, the second after the Lions had mopped up a spilled mark from Will Hayward in dangerous territory.

The Swans’ slightly greener on-ball unit couldn’t stay with them, while in defence, Brisbane’s Harris Andrews and Darcy Gardiner were aerially imperious as per usual.

Sydney’s Tom Papley, making his return from a hamstring injury, barely had an impact in a game where his team could have really done with his trademark energy infusions.

Franklin’s bag of 6.0 took his career tally to 1013; it’s still early in 2022, but he looks to have more than enough petrol in the tank to go around at least once more after his contract expires this year. He should have kicked at least seven goals after having an early set shot from his favoured territory, 55 metres out in the corner, unfairly ruled out: Buddy’s shot appeared to cross the line just before Darcy Fort got his hand to it, but the score reviewers deemed there wasn’t enough evidence to overturn the umpire’s original decision.

Fox Sports later showed Gardiner stepping off his mark while Franklin was taking his kick in a brazen breach of the ‘stand’ rule, so either way, it should have been six points.

There were only two goals, one to each team, kicked in what was an arm-wrestle of an opening quarter – and it took 10 minutes until a delightful Callum Mills kick stopped Errol Gulden to end the deadlock with a left-footed snap. The quarter-time score of 9-9 put the attacking onslaught that followed from Brisbane in true perspective.