Gold Coast have overcome the loss of Wil Powell to a horrific leg injury, beating Adelaide by 43 points in a boost for their finals hopes. 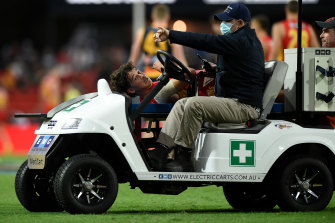 Wil Powell is carried from the field.Credit:AFL Photos

But celebrations were tempered after Powell was dragged down in an attempted tackle by Adelaide’s Ned McHenry during the third quarter and immediately grabbed at his lower right leg.

McHenry called for medical assistance and broadcast vision showed what appeared to be a break above Powell’s right ankle, with his foot at an awkward angle.

Play was held up for more than five minutes while medical staff attended to Powell on the field before he was carried off the field.

The vision was so gruesome that the television broadcaster opted against showing a replay.

“Wil’s such a good clubman and brings such good energy to our footy club and we love him,” Suns co-captain Jarrod Witts told Fox Footy. “Hopefully it’s not too bad but it didn’t look too good.

“We probably lulled there for a bit after the injury but we were able to get it back on our terms.” 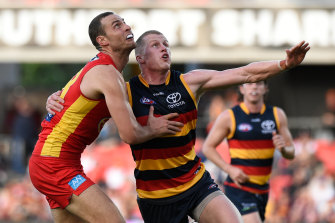 Gold Coast led by 29 points when Powell went down. They also lost Connor Budarick to a hamstring injury, while Adelaide’s Riley Thilthorpe was substituted out with an ankle injury soon after the restart.

Goals to Taylor Walker and substitute Lachlan Murphy helped Adelaide close to within 20 points by three-quarter-time. But the Suns held off their opponents and kicked away with eight goals in the final term to post a third consecutive win, their fifth in six games.

Rankine also had two goal assists and 10 score involvements in an unselfish display. 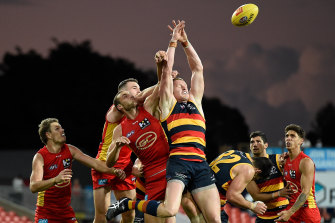 The pack goes up at Metricon Stadium.Credit:Getty Images

After trailing by six points at quarter-time, the Suns took control with a six-goal second term.

Chol kicked two quick goals to spark the run and two for Holman at the start of the third quarter extended the home side’s dominance.

At that stage they had kicked eight of nine goals.