Wests Tigers director of football Tim Sheens has landed his first signing with Isaiah Papali’i to join the club on a three-year deal worth just under $2 million from 2023.

The Dally M second-rower of the year was locked in negotiations with Parramatta about an extension before their western Sydney rivals pounced.

Papali’i was one of the best pick-up buys in the competition last season, and his management were hoping the Eels would bump up the $200,000 he stood to collect next year.

The New Zealander’s exit comes just a week after fellow Eels back-rower Marata Niukore signed a whopping four-year deal with the Warriors from 2023.

Parramatta’s player retention strategy has become a huge off-season talking point with so many of their players off contract at the end of next year and officially free to sign deals with rivals for the following season.

Clint Gutherson, Reed Mahoney and Junior Paulo are three of their biggest stars – and all managed by Sam Ayoub – and have generated intense interest. 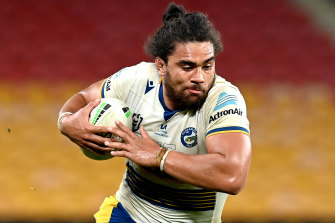 Tigers bound … Isiah Papali’i has inked a three-year deal with the Wests Tigers from 2023.Credit:Getty Images

Papali’i was keen to stay in Australia and left the Warriors after the 2020 season to test himself out of his comfort zone. That Papali’i is on a contract for 2022 which hardly befits his new-found standing in the game will do little to help the Eels retain their headliners.

While the Tigers could press to have Papali’i, who can play in the middle and on an edge, make the switch immediately, the Eels dug their heels in with Stefano Utoikamanu last year and refused to let him join their bitter rivals before his contract expired.

The Tigers confirmed they would officially announce the prized signature on Thursday afternoon.

Sheens, who led the joint venture to their only premiership in 2005, returned last Monday in a director of football role and will be thrilled to have locked in a quality forward like Papali’i.

Tigers coach Michael Maguire is also in charge of the New Zealand Test team and would have already had Papali’i pencilled in for that squad.

The signing came on the same day halfback Luke Brooks resumed training at the club after spending most of his off-season reading headlines about himself being linked to Newcastle as Mitchell Pearce’s replacement.

Catalans-bound Pearce said himself this week Brooks would be the perfect fit at the Knights, despite having two more years to run on his Tigers deal, and that “getting him out of his own comfort zone and playing behind a good pack will bring the best out of him”.

Meanwhile, it remains to be seen if the Tigers and Canberra can come to an agreement about signing Josh Hodgson, with the English international keen to come to Concord. Should Hodgson make the move, Jacob Liddle would likely head the other way.

Meanwhile, Dylan Walker has re-signed with the Manly Sea Eagles until the end of 2022 with coach Des Hasler saying: “Dylan is a very experienced player, his re-signing was a high priority for us.”