VFL/AFL legend Ron Barassi and his wife Cheryl have tested positive for COVID-19.

A spokesperson for Barassi said both were double vaccinated, and focusing on recovering at home. Neither had needed to go to hospital. 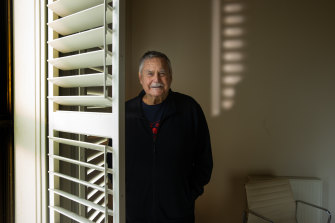 Barassi, 85, is thought to have contracted the virus at Peter “Crackers” Keenan’s 70th birthday party last month. More than 130 people attended the party, and a number of attendees have since tested positive for COVID-19.

The hall of famer was meant to take part in two events this week – one on Wednesday to promote the Demons’ premiership celebrations at the MCG on Sunday, and an appearance on Sunday, but is unable to take part.

Until September, Barassi was the Demons’ most recent premiership captain, when he led them to success in 1964. The ’64 grand final was his last game for Melbourne – one of six flags he won as a player.

Until COVID-19 restrictions forced a pause, Barassi was going to the gym twice a week and has surprised his trainer with what he can do.

When the Hall of Fame was instituted in 1996, Barassi was the first Legend to be inducted. Overall he took part in 17 grand finals for 10 premierships as both a player and coach.